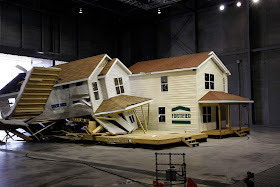 The newly constructed Institute for Business and Home Safety (IBHS) Research Center is, disappointingly, not in Kansas. But it is able, within its six-story walls, to simulate a tornado. Or a hailstorm. Or a wildfire.

The insurance industry spent $40 million to build this giant facility in South Carolina. It contains a turntable that can hold 9 full-size houses, built to various safety standards, and subject them to almost any kind of severe weather condition. A water tank larger than an Olympic swimming pool makes the rain, which falls at up to 8 inches an hour. One hundred and five fans, each five and a half feet across, generate winds up to 140 mph. Burning embers can be made to fly through the air.
In this video, you can see a house go down like a pile of toothpicks in a simulated windstorm. Next to it, a specially fortified house sheds a few shingles but looks otherwise unbothered. Eventually, the IBHS plans to throw airplanes and tractor trailers into the mix. "There are all kinds of things we can fit in there," executive Julie Rochman says (with, one imagines, barely restrained glee).
It's a testament to how much money they lose in major disasters that the insurance industry is willing to spend $100,000 for just one hurricane simulation. The Wall Street Journal says that in the first half of 2010, insured catastrophic losses cost the industry $7.9 billion. And in a warming world, extreme weather events are expected to be more frequent. This kind of research will keep us at least a little safer.
In unrelated news, Paul, the octopus who was famous for predicting World Cup winners, died today. Farewell, inkfish friend!
Photo: DisasterSafety.org
Elizabeth Preston on Tuesday, October 26, 2010
Share