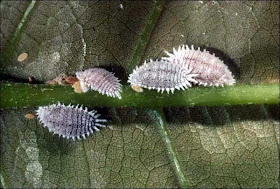 Describing what might make the worst gift ever, researchers John McCutcheon and Carol von Dohlen report that they've found a system of symbionts resembling Russian nesting dolls. A tiny bacterium lives inside a slightly less tiny bacterium, which lives inside a mealybug. Unlike a nicely painted set of wooden dolls, though, each complete on its own, the matryoshka mealybug and its many inhabitants can't live without each other.

The citrus mealybug, Planococcus citri, is a a sap-sucking plant pest barely an eighth of an inch long. It's notable for destroying fruit crops and for being herded by ants, which fend off the mealybug's predators in exchange for eating its secretions.

As if being farmed by ants weren't insult enough, P. citri needs bacteria to live inside it and provide it with essential nutrients. Other symbiotic relationships have been observed between insects and bacteria, with insects sometimes harboring multiple bacterial species that help them maintain a balanced diet. But the citrus bug has a never-before-seen system: Inside its symbiont called Tremblaya lives an even smaller bacterium the authors call Moranella.

The medium-sized bacteria are, like the mealybug, a little pathetic. The authors call Tremblaya's genome "extremely small and degenerate." In fact, it's the smallest genome ever reported, with a meager 139,000 base pairs. (For reference, the human genome has 3 billion base pairs, which is medium-large among living things.)

Because Tremblaya has such a reduced genome, it's missing the equipment to make many nutrients for itself. So it, in turn, relies on the tiny Moranella bacteria that live inside it. But even Moranella is lacking some genetic tools. All three organisms, it seems, must rely on each other to help manufacture their essential amino acids.

It's still mysterious just how the three organisms complete the complex molecular pathways required to make these nutrients. At various steps in these pathways, the symbionts would have to pass molecules between each other; the authors say it's "unclear" how this works. They speculate, though, that the Tremblaya bacteria may simply crack open the Moranella bacteria living inside them to get the molecules they need.

Tremblaya bacteria may be rude hosts, but the mealybugs seem to be more delicate, somehow regulating the numbers of both bacteria inside them. Like the mind-controlling fungi that prey on insects, or the whole ecosystems of bacteria and viruses that live inside humans, mealybugs prove that even the most unimpressive organism can show us something new.