If only for reasons of terrestrial mobility, you probably shouldn't populate your whole superhero squad with cetaceans. Evil lairs on land would be difficult for you to infiltrate, to say the least. But you'd do well to consider including a dolphin or two in your next hero league. Dolphins were all over science journals last week, displaying powers that could put certain superheroes out of business.


Wolverine
A letter published in Nature's Journal of Investigative Dermatology pointed out that bottle-nosed dolphins have remarkable healing abilities. They have plenty of run-ins with sharks: one survey found that 40% of dolphins had visible shark-bite scars. But all of these wounds had healed without killing the dolphins from blood loss or infection.

The author, Michael Zasloff, also cites observations of dolphins healing in captivity. Despite having wounds a foot long and more than an inch deep--reaching all the way through their skin and blubber--these dolphins were as good as new just four weeks later. What's more, they showed no signs of pain while they went about their business.


Setting aside the mystery of their apparent lack of discomfort, how do dolphins prevent massive blood loss after having a foot-wide bite taken out of them? It's not clear, especially since their blood actually clots less readily than ours. A further mystery is how they avoid infection. Swimming around in seawater is pretty much the opposite of the advice humans get from their doctors to keep a wound clean and dry.

Zasloff speculates that some component of dolphin blubber acts to prevent infection. He suggests a certain molecule called isovaleric acid, which dolphins create within their blubber. It's known that this fatty acid accumulates in the blubber and doesn't get burned up for fuel during times of starvation. The molecule is also known to have antimicrobial powers. Perhaps, Zasloff says, isovaleric acid is released from the blubber after a serious injury and protects the surrounding tissue from infection.

Whatever factors give dolphins their healing superpowers, humans would love to go Rogue and borrow a little for ourselves.
Iron Man
Who needs special healing abilities when you have the brains and resources to build yourself a protective suit? Bottlenose dolphins living in Shark Bay, Western Australia, have come up with a clever way to forage for food. They tear up basket sponges that are unfortunate enough to be living near them, like this one: 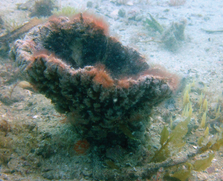 Then they convert those hapless sponges into protective face-masks: 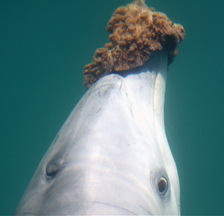 The "spongers" swim along the seafloor and poke around with their sponges until they disturb a fish hiding under the rocks there. Then they ditch the sponge and snag their prey.
The seafloor in Shark Bay is littered with shards of shell, rock and coral that could scratch dolphins' skin. So the sponges seem meant to protect dolphins' beaks while they ferret out food. But researchers from Georgetown University wondered why dolphins would bother to go digging for food with their faces when they already possess the power (shared by Daredevil) of echolocation. Since they can hunt effectively with sound, why do these dolphins hunt with sponges?
To find out, the researchers gamely attached a sea sponge to a pole and began poking around the seafloor with it, emulating a sponge-hunting dolphin. Whenever a fish popped out of the rubble, they caught it and identified its species. They discovered that the fish species hiding under the rocks were less likely to have the balloon-like organ called a swim bladder. This lack of an airy center, along with their rubbly hideout, makes the fish harder to detect by echolocation.
The "sponging" behavior is mostly seen in female dolphins, who teach it to their daughters. Obvious Eline Benes jokes aside, it's a clever solution for reaching a food source the dolphins couldn't otherwise get to.
Magneto
Another way to find food that's well hidden--if your food is a living animal, anyway--is to sense the electrical field around its body. All animals generate faint electrical fields, thanks to the currents running through our nerves and muscles. A group of German researchers has discovered that the Guiana dolphin, a species living off the north and east coasts of South America, is able to perceive these electrical fields.

The researchers examined dark pits on the dolphins' snouts that were thought to have no function--they're remnants of the holes whiskers grow out of in some other mammals. Rather than being useless, the researchers found, these pores have evolved into active sensors for electric fields. To test how sensitive the dolphins were to the kinds of electric fields their prey might give off, researchers taught a captive dolphin to hold its beak inside a hoop. When it felt an electric current near its beak, the dolphin was trained to signal the researchers by swimming away from the hoop. (This sounds like a more-fun version of the hearing tests given to kids: If you hear a beep, run!)

The dolphin could reliably sense electrical signals like those given off by its prey fish. The researchers think this ability might help supplement the Guiana dolphins' echolocation abilities, since they tend to live in murky waters and hunt for fish that live in mud.

Dolphins aren't the only animal with an electric sense. Many fish and some amphibians have also evolved the ability to perceive electrical fields in water. Among mammals, the power had only previously been observed in the echidna and platypus--weird egg-laying mammals that, superhero or not, would have a home on any team of mutants.

Zasloff, M. (2011). Observations on the Remarkable (and Mysterious) Wound-Healing Process of the Bottlenose Dolphin Journal of Investigative Dermatology DOI: 10.1038/jid.2011.220