If You Give an Opossum a Mozzarella Stick

When the bus driver pulled away and I was left standing with a dozen near-strangers in the lobby of Durham's Museum of Life and Science, I admit I felt some doubt.

It was the second day of Science Online 2012, a conference-meets-mothership for bloggers, researchers, and other science communicators. We'd been promised a tour, but that promise had come electronically from yet another person I didn't know. I began to wonder how much time we could kill in the gift shop if needed, and where exactly in North Carolina I was. Then Keeper Mikey appeared, wearing a baseball cap and a big grin, and told us we were going to see some bears today.

I learned several things that afternoon. Outside, on the trail, we ran into three boys who ranged from knee-height to thigh-height. I asked them if they'd seen any animals they liked. "I saw a snake!" the biggest brother said. "But it would be cool if there was a tiger." In the spirit of the museum's tinier visitors, I'm going to present our adventures in modified children's book titles. 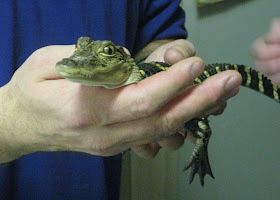 The first thing Mike did after leading us into a staff-only hallway was disappear behind another door. "You stay put," he called behind him, "It's venomous down here!" Without leaving us much time to wonder what that meant, Mike reappeared holding Phoebe.

I learned from Phoebe that baby alligators are pretty irresistible. Mike wanted us to take turns petting Phoebe on her back, but we convinced him to let us hold the alligator ourselves. "Just promise you won't yell at me if she gets nippy," he said. Phoebe was a good sport, looking around and blinking with her upside-down eyelids while a succession of humans held her around the belly. (Later, on the bus, one woman confessed that she thought Phoebe felt like a purse. "Technically," someone else countered, "a purse feels like Phoebe.")

I had also never figured alligators for intelligent animals. But Mike told stories of his work at other alligator facilities, where the animals knew their names and would come when called. He said he could yell out the name of an alligator, see its wake approaching him in the water, and pass it a meatball on a stick when it stopped near the shore. Summoning alligators isn't a talent I'd be quite so excited about.

If You Give an Opossum a Mozzarella Stick 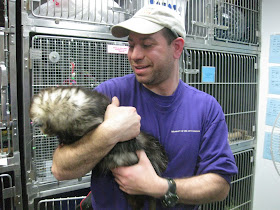 Most of the animals at the museum are rescues, used for education because they're too tame or injured to go back to the wild. While juggling an extraordinarily squirmy opossum, Mike let us in on a secret: Opossums go nuts for mozzarella sticks. In fact, he seemed to know the favorite food of every animal under his care. Lemurs love Craisins. Black bears don't care too much for raw sweet potato, but they love it after it's been cooked with a little vanilla. Doesn't sound too bad to me, either. 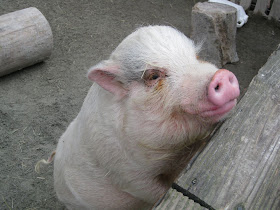 No matter how cuddly the animals look, sometimes they want to chew on your fingers. Mike gave this potbellied pig a stern "No nipping!" command as it stood on its hind legs to greet us. Potbellied pigs are highly intelligent ("Smarter than your dog!") and often kept as pets.

This pig's companion was named, Mike told us regretfully, Miss Piggy. Any animals that arrives at the museum with a name gets to keep it--no matter how much that name pains the staff. The center receives plenty of cast-off pet reptiles, for example: "People say, 'Oh, this is my iguana, his name's Iggy,'" Mike said. "Of course it is." We met a lizard named Godzilla, a donkey named Lightning, and a gecko named Gordon. 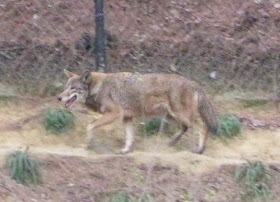 I'd never seen a red wolf before, and that's probably because there are only a few hundred of them alive in the world. The two at the Museum of Science and Nature belong to the government--they have numbers, not names.

Mike told us they're hoping for cubs this year, but so far the male and female wolf haven't hit it off. He described watching video footage of the wolves one night: The male lay down a safe distance from where the female was sleeping and closed his eyes. Later in the night, he opened his eyes, crept a little closer to the female, and slept again. He kept sneaking closer to her throughout the night until she finally woke up and growled, sending the male slinking away.

Since the red wolf population at one time dipped to only a handful of breeding individuals, today's population isn't healthy by genetic standards. When a whole population is closely related, there aren't likely to be individuals with genetic mutations that give them different strengths. This means a virus or a shift in climate could wipe out the whole population in one go.

One member of our tour suggested solving this problem by irradiating the animals before releasing them in the wild. "I'm joking, by the way," she added for the benefit of everyone live-tweeting.


Where the Wild Nerds Are
We'd been on our tour for at least an hour when two members of the group suddenly burst out with, "Oh! It's so nice to meet you!" and shook each other's hands. Mike looked totally baffled. I told him that plenty of people at the conference knew each other by their Twitter handles but hadn't met face-to-face before. He looked only slightly less baffled. 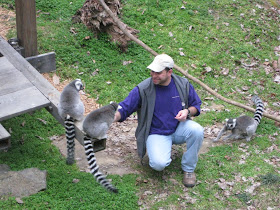 While Mike went into the ring-tailed lemur enclosure and fed them Craisins, we called down to him with questions: What's their social structure like? (Matriarchal.) Why do they carry their tails up in the air when they walk? (To signal to each other in tall grass.) What are those collars for? (They're radio collars so the lemurs can be tracked through the woods if they escape.)

"Are they soft?" someone yelled down.

Mikey looked up at us and nodded, grinning.


Cloudy with a Chance of Bears 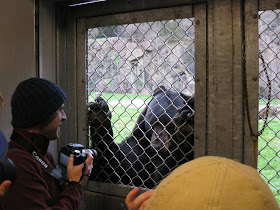 It began to sprinkle while we headed out to see the animals we'd all been waiting for: the black bears. When we arrived, two were huddled in a cave and the other two were high on a cliff, hidden except for their faces. Mike led us into a shed and through a series of padlocked metal gates. The last gate, which he kept closed, looked directly onto the enclosure. "You stay here," Mike said. "I'm going to go on the roof and throw raisins."

He disappeared, and a few moments later the bears began to trot toward us. A bear that had been on the cliff shimmied backward down an incline, checking behind her, like a toddler descending stairs. Curious to see who was visiting, another bear came right up to the fence we were behind and stood up against it. Cameras flashed. We gaped at the bear's big paw pads, looked it in the eyes. Mike returned and called us around to a fenced-in area at the side of the shed. 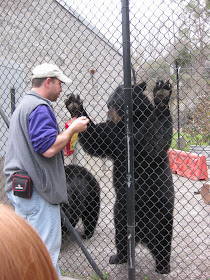 The bears have been taught various commands; they stood up, sat down, and followed Mike back and forth (their round teddy-bear bodies bouncing) in exchange for spoonfuls of raisins. This is so that, if the bears need a physical exam or to have blood drawn, a veterinarian will be able to interact with them easily. We witnessed the bears' different personalities: Virginia licked up raisins delicately, while Gus tried to gobble the whole plastic spoon. If Mikey ignored them for too long, they snuffled up behind him to get attention.

We were sorry to leave the bears and the center's other inhabitants, including Keeper Mike, the friendliest animal of all. Virginia was nice enough to pose for a picture with us before we left. 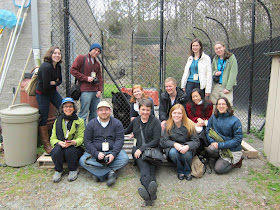 Meanwhile, Gus turned away and scratched his rear end at length on the corner of the shed. He wasn't feeling quite as sentimental.

Photos by me, except for the final photo provided by @CogSciLibrarian. You can find more photos (better than mine) at this Storify. Thanks to Mikey Romano for a terrific afternoon!