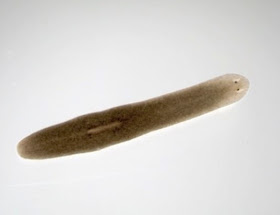 Meet Schmidt. Schmidtea mediterranea is a hermaphroditic, googly-eye-spotted flatworm that sometimes chooses to reproduce by breaking in half and regenerating two new bodies, but that's not the most interesting thing about her/him. This tiny animal has just demonstrated to biologists that a part of the cell crucial to all animal life on Earth is, in fact, optional.

You might remember the centrosome from high school biology as a pair of perpendicular, hot-dog-shaped objects inside a cell. Just before cell division, this structure duplicates itself, and the two centrosomes travel to opposite ends of the nucleus. Then each centrosome sends a cascade of delicate fibers toward the center of the nucleus, where the chromosomes have already copied themselves and paired off in an orderly manner. The fibers latch on to the chromosomes and drag them back to the poles of the nucleus, one copy on each side. After this, the cell can divide cleanly into two identical daughter cells.

Clearly the centrosome, which shuttles around chromosomes like a chaperone on a school field trip, is important to cell division. That's why evolution has held on to centrosomes in every animal biologists ever examined--until the planarian Schmidtea mediterranea.

Researchers led by Wallace Marshall at the University of California, San Francisco, wanted to know how centrosomes were involved in the amazing regenerative abilities of this planarian. Tearing itself in half isn't its only trick--even a tiny piece of a planarian's body can regenerate into an entire individual. The researchers used interfering bits of RNA to block the planarian from manufacturing centrioles, the rod-shaped bricks that make up centrosomes.

In addition to building centrosomes, these rods also make up cilia, the wavy little arms on the outside of some single-celled organisms (or on the cells of your trachea, brushing debris out of your airway). When the researchers prevented S. mediterranea from making centrioles, the worms had trouble moving around. This was unsurprising: without an adequate supply of centrioles, they couldn't build cilia to keep them gliding as usual. (Instead, they inched.)

Since the worms weren't making centriole bricks, they shouldn't be able to build centrosomes, either. The researchers sliced up their subjects, expecting that a lack of centrosomes would prevent the planarians from regenerating.

The worms responded by regenerating exactly as usual.

The researchers went back and looked at normal S. mediterranea individuals whose genes they hadn't messed with. Their cells didn't have centrosomes either. Marshall and his team were forced to conclude that planarians pull off their amazing feats of regeneration without centrosomes--and that the centrosome isn't crucial to animal life, after all. Centrosomes may also be missing from schistosomes, the planarians' parasitic relatives.

So how did the the planarian lose its centrosomes? The team speculates that this just-so story might hinge on the unusual pattern of cell division in a planarian or schistosome embryo. Now that we know centrosomes aren't required for animal life--and that animals without them can perform some incredible stunts of cell division--we'll have to rethink what exactly they're doing in our own bodies.