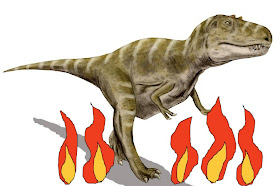 As if a world dominated by hungry, house-sized lizards weren't sufficiently exciting, scientists have added another set piece to our image of the Cretaceous: raging wildfires.

The Cretaceous period, which ended about 65 million years ago with the extinction of the dinosaurs, was hot. That's thanks to volcanos that pumped carbon dioxide into the atmosphere and created a greenhouse effect. Researchers from London and Chicago now say it was also a "high-fire" world. Frequent blazes may have kept animals on the run, created some of the fossil beds we study today, and helped determine which plant species survived into the next era.

Led by graduate student Sarah Brown from the Royal Holloway University of London, the researchers tracked the appearance of charcoal in ancient sediments. Like a set of sooty footprints right through the fossil record, the charcoal evidence showed when and where fires had occurred.

The team saw that wildfires had increased during the Cretaceous period. These fires were probably sparked by lightning, and their flames were fanned by the high concentration of oxygen in the ancient atmosphere. Today, oxygen makes up about 21% of our air. But during the Cretaceous, it may have risen as high as 25% or more.

This high oxygen content, the authors say, would have allowed plants to burn without being bone dry. A spark in a green forest, instead of dying out as it would today, might become a full-blown fire.

Brown and her coauthors did not find any evidence that these fires contributed to killing off the dinosaurs. But they note that after a fire burns through a piece land, erosion is likely. There may be rapid flooding or mudslides. In the Cretaceous, these events might have trapped and killed dinosaurs and other animal life--and helped preserve their bones.

The authors point to certain fossil beds that lie in floodplains and contain charcoal, as well as plant and animal remains. These could be sites where wildfires triggered flooding, conveniently sweeping lots of informative fossils into one place for future scientists to find.

Charred plant remains in these fossil beds provide another clue about the effect of fire. As the Cretaceous went on, the types of plants being fossilized gradually changed. Flowering plants, called angiosperms, became more and more common. Gymnosperms--the more ancient, flowerless species such as cone-bearing trees, cycads, and ginkgos--faded into the background. 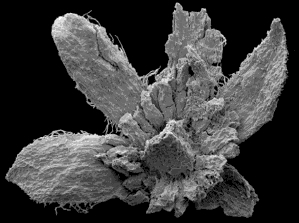 A charred flower fossil from the Late Cretaceous.

Frequent fires may have given an added edge to the angiosperms. The new types of plumbing these plants had invented let them grow faster and more efficiently. Rather than trees, the flowering plants growing during the Cretaceous seem to have been weedy and shrubby types. After a fire, they could regrow faster than the gymnosperms. And their new growth provided fresh fuel for wildfires, creating a cycle that encouraged the growth of flowering plants and left older models in the dust.

Though fire didn't do in the dinosaurs, then, it may have helped set the stage for the dominant plants of the modern age. (As if we needed any more drama.)