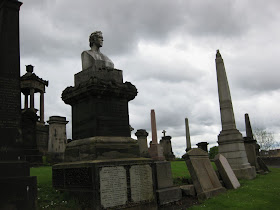 The other kids on the school bus used to shriek when we stopped at my house. Or hold their breath. I lived directly across the street from a cemetery, and until I started riding the bus I had no idea this was supposed to be scary.

My parents claim that the realtor who sold them the house, perhaps out of desperation, told them people were "dying to move in!" I was aware of our deceased neighbors but unbothered by them. My dad explained how visitors to the Jewish graveyard put stones on top of the grave markers to show respect, so I pocketed small rocks on our walks there and left them on lonely-looking headstones. Friends came over for the best sledding in the neighborhood. (My baby sister, though, didn't immediately grasp the concept. One day while a funeral went on outside, my parents asked her what she was watching out the window. She answered, "All those people are lined up waiting for their turn to die!")

Psychologists have put a great deal of study into how reminders of mortality affect people. They call it "terror management," assuming that most people view death like those kids on the bus viewed my street: It's gross and we want to be far away from it. So we build up psychological protections for ourselves, which of course are not any more useful than holding our breath but make us feel better.

A new paper published in Personality and Social Psychology Review looks over the accumulated evidence and concludes that thinking about death can make your life better. Previous terror management research has focused on the dark side of our psychological protections: Psychologists say that reminders of death can make us more hostile toward people we see as outside our own group. But researchers led by Kenneth E. Vail III at the University of Missouri, Columbia, say the perks of morbid thinking are too great to ignore.

Conscious reminders of death can encourage people to stay healthy and pursue their goals. In various studies, subjects smoked less, planned to exercise more, and were more conscientious about sunscreen after being made to think about death.

When people were asked to list their goals immediately after answering questions about death, they placed more importance on what psychologists call "intrinsic" goals--those related to relationships and personal growth, for example, rather than wealth or attractiveness. But after a delay, they went back to those "extrinsic" (shallower) goals. People who were asked to do daily contemplations of mortality for a week also put greater importance on intrinsic goals.

Other studies have looked at what happens when people are primed subtly to think about death. In an experiment with an elaborate setup designed to seem accidental, subjects walked through a cemetery (or not) and overheard a person talking on a cell phone about "the value of helping." A little while later, subjects saw a second person drop a notebook. Those people walking through the cemetery seemed to be more receptive to the helpfulness hint, and were much more likely to stop and help the struggling passerby. Similar experiments got subjects to feed the homeless, donate to sick children, or help disabled people by reminding them of death.

Thoughts about dying may strengthen our bonds to others, too. Studies have found that after reminders of mortality, people feel more committed to their romantic relationships and strive more for intimacy. They're also more inclined to have children.

Tapping into the benefits of our fear of death, the authors say, could make people "more inclusive, cooperative, and peaceful." The downside of our psychological response to death is hostility toward outsiders. But as long as people view themselves as part of a larger community, thinking about our mortality can encourage us to clean up our acts. We may be more helpful to others, more committed to our relationships, more focused on healthy habits, and more thoughtful about our long-term goals.

The healthy side effects of dwelling on death inspired game designer Jane McGonigal to create a game called Tombstone Hold 'Em.* She's organized large-scale events in cemeteries around the world. During a game, competitors pair off and race around a graveyard to find the best "hand" made out of two tombstones. The game is built to tap into the psychological plus-sides of working with a group, running around outside, and--yes--thinking about dead people.

Not everyone believes turning a graveyard into a giant poker game is a good idea. Tombstone Hold 'Em stirs some controversy among people who think frolicking among one's deceased neighbors is disrespectful. But McGonigal thinks respect for the dead can come from positive experiences we have while we're around them.

Consciously or not, we took the same tactic in my neighborhood, where families used to gather on top of the cemetery hill to watch Fourth-of-July fireworks. Parents stood between the tombstones while kids sat on top of them for a better view. The youngest ones got hoisted up to stand on tall stones, their parents' hands beneath their armpits for balance, so they could see the distant bursts. No one had to hold their breath.


Image: Necropolis in Glasgow, Scotland, by me.