Octopuses Host a Masterclass on Hiding 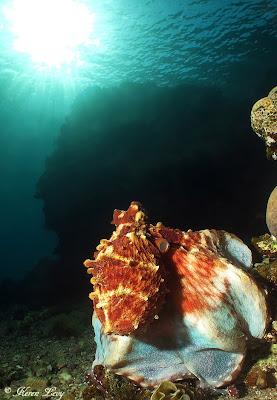 When you're surrounded by an ocean full of potential predators, the best way to avoid seeing the inside of one's stomach is to make sure none of them see you in the first place. Octopuses and some other cephalopods are experts at camouflage, manipulating the colors and textures of their skin to hide in plain sight. But their strategy, it turns out, has nothing to do with disappearing into the background.

To learn the camouflaging secrets of the masters, researchers led by Noam Josef at Ben-Gurion University of the Negev in Israel went scuba diving. On reefs in the Red Sea and Tyrrhenian Sea, they snapped pictures of two octopus species (Octopus cyanea and O. vulgaris) whenever they saw an individual hiding—crouched low and motionless for a minute or longer.

For the pictures to work in the team's digital image analysis, they had to be sunlit just so and taken from directly above. Over three years, they captured just 11 photos that fit their criteria. "These images are a bit hard to get," Josef said in an email. Not to mention the challenge of finding a camouflaged octopus in the first place. 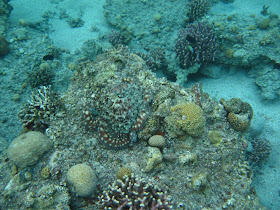 Hint: Look for the coral with tentacles.

Each bird's-eye, or rather shark's-eye, photo was converted to a grayscale image. Researchers selected a rectangle showing the pattern on the octopus's mantle (the part that's not tentacles). Then a software algorithm compared the mantle sample to rectangles from everywhere else in the photo, shifting the frame one pixel at a time and searching for a match.

The best matches to the octopuses' camouflage patterns were not to be found in the gravelly ground beneath them. Instead, 10 out of the 11 octopuses had clearly mimicked a specific object nearby. They played coral, rock, weird sand blob, or algae patch. 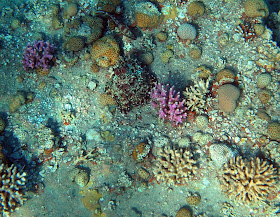 View this picture larger and you'll see that one coral has eyes on top.

A camouflaged animal's best strategy depends on the viewpoint of its predators. Many fish have light-colored bellies that blend in with the sky when seen from below. Certain pygmy sharks take this trick a step further and emit a blue glow from their undersides. When viewed from above, fishes' darker-colored backs vanish into the background of the ocean.

An octopus sitting on a reef has to worry about big fish hunting from above, as well as moray eels and other predators that creep up from the sides. Since these enemies approaching from different angles will see the octopus framed against different backdrops, maybe it makes sense for the octopus to forgo blending in altogether. It's stuck being obvious, so it may as well pose as an obvious object that's less edible.

"Sometimes octopuses make an honest mistake and simply become conspicuous" by camouflaging, Josef says. "However, in a complex environment like the coral reef, acquiring key features of an object may serve the octopus better than just matching the general look of the reef." You can see a few of those convincing key details in the photos above, where octopuses have contorted themselves into the knobby branches of a coral or a shell's striped ridges.

Scientists have discovered some of the specialized cells in octopus skin that help them pull off their elaborate imitations—pigment holders, reflectors, light scatterers. But Josef says there are still more questions than answers: "What visual cues are used by these animals? How do octopuses match their colors even though they're colorblind?" (Yes. Colorblind.) "What information is transmitted from the eye to the brain? And what does an octopus really see?"

We're still "far from understanding" the camouflaging act of the octopus, Josef says. We'll have to keep hunting for scraps of information the cunning cephalopods let slip. That is, assuming we can find them first.