Enslaved Ants Get Even by Killing Captors' Babies 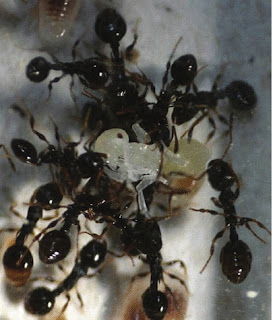 In the world of ants, a "slave rebellion" isn't a sudden uprising: it's the slow and stealthy murder of the next generation of captors while they're too young to fight back. Ants that have been seized and put to work tending another species' young instead tear some of those young to shreds. Now scientists have found that these rebellions aren’t random acts of retaliation, but an ongoing strategy in the war between these species.


The battles take place in the leaf litter. In the summer "slavemaker" ants send tiny scouts out from their nests to search for targets, explains Susanne Foitzik, a professor at Johannes Gutenberg University of Mainz in Germany. Foitzik studies a North American species of slavemaker ant called Protomognathus americanus, but there are others too.

When a scout finds a target colony, she sneaks inside to see how big it is and what species live there. In the case of P. americanus, she’s looking for one of three ant species in the genus Temnothorax. Then the scout returns home to recruit help. An army of P. americanus workers returns to attack the target site. The invaders release a chemical weapon from their bodies that sends the other ants into confusion; the besieged ants may start attacking each other while the invaders cut off their legs and antennae.

Once all the adults have fled the colony, the slavemakers either move in themselves or pick up the colony's abandoned young and carry them home. These Temnothorax babies will grow up to become workers for the slavemaker colony. They’ll go on raids and defend the home nest alongside their P. americanus captors. They’ll even tend their captors' own young—or pretend to.

Foitzik and her colleagues first observed the revenge of Temnothorax a few years ago. Spying on slaveholding P. americanus colonies in the lab, they saw that the captive ants tasked with taking care off the young sometimes do just the opposite. "Slaves carry healthy pupae out of the nest, where they die from neglect," Foitzik says. At other times, they saw slave workers turn on young, soft-bodied pupae and—as in the photo above—tear them apart and eat them.

In a new study, Foitzik and other researchers sampled ant colonies from New York, West Virginia, Ohio and Michigan to find out whether the rebellions they’d seen were a fluke or a common occurrence. They collected a total of 352 colonies, both P. americanus and Temnothorax longispinosus, and brought them back to the lab for observation. In the untouched Temnothorax nests and in slavemaker nests tended by captive Temnothorax ants, they monitored how many young survived to adulthood.

At least part of this difference in survivorship, the researchers believe, is thanks to enslaved ants allowing some of their charges to die (or killing them outright). Rebellion seems to be more common in some populations than in others, because the death rate of young P. americanus ants varied from site to site. But in all cases, it was higher than the death rate when Temnothorax ants raised their own young.

Additionally, “[Slave] workers attack and kill slavemaker queen pupae more often than male or worker pupae,” Foitzik says. Caretakers may be able to detect which young are destined to be queens by the particular molecules on the outsides of their bodies.

P. americanus ants are stuck with their slavemaking strategy. They rely on their enslaved workers, so they can’t simply free their captives and take care of their own young. As for the enslaved Temnothorax ants, it’s too late for them: whether they obediently raise their captors’ young or not, they can’t return to their own nests. And presumably they don’t have big enough brains to house thoughts of revenge. So why bother with the baby-killing?

The acts of rebellion by Temnothorax ants might protect their relatives in the future, the researchers say. By killing some of their captors’ young, especially the queens, the slaves ensure that the next generation of slavemakers will be a little smaller. The other Temnothorax nests in the neighborhood—which may include relatives who share the enslaved ants’ genes—will be that much safer from attack. The war will continue, but neither side is conceding.