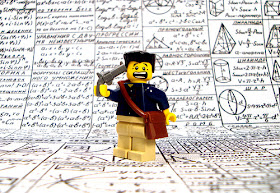 If subtraction makes you sweat, division gives you diarrhea, and the Pythagorean theorem inspires panic attacks, you might be afflicted with math anxiety. Others may not always be sympathetic to your fear of tipping in restaurants without your cell phone. Brain scans, though, show that people like you suffer from more than just nerves. In people who are highly anxious about math, the threat of doing arithmetic activates the same brain areas as a punch in the stomach.

Researchers at the University of Chicago's Human Performance Lab study how humans think and what makes us succeed—or not—under pressure. Anxiety has been found to heighten our awareness of our bodies and make us more sensitive to pain. So Ian Lyons and Sian Bielock wondered whether feelings of anxiety might have a direct connection to pain centers in the brain.

For their anxious guinea pigs, Lyons and Bielock used humans with "high math anxiety." They measured math anxiety using a survey in which subjects rated how anxious they'd feel in various scenarios, including "walking to math class" and "being given a set of addition problems to solve on paper." From their potential subjects, the authors selected 14 people who scored especially high on this test and 14 others who scored especially low. Subjects were also tested for general anxiety (to make sure their math fears weren't part of an allover nervous disposition) and working memory (to ensure that their problem-solving capacity was normal).

Then all the subjects solved a series of math and word questions while inside an fMRI scanner. For the math questions, subjects saw equations like (3 * 5) – 4 = 11 and had to decide whether they were true or false. Some of the equations involved larger numbers to make them harder. For the word questions, subjects saw sets of letters such as yrestym and had to decide whether they spelled a real English word backward.

Subjects with high math anxiety struggled with the harder arithmetic problems more than subjects with low math anxiety did. And in the high-math-anxiety subjects, math problems lit up brain regions involved in sensing pain. Specifically, pain in the gut.

These brain areas, the dorso-posterior insula and mid-cingulate cortex, "are active during the experience of visceral pain—for example, a stomachache or a gut punch," says Ian Lyons. "These areas are also involved in detection of threat to the body." So while people with a lot of math anxiety may not feel bodily pain when facing a math test, their brains seem to interpret each arithmetic problem like a physical threat.

Earlier research found that those same brain areas were activated when people experienced social rejection, Lyons says. Our brains apparently view getting ditched by our friends, or (for some of us) solving for x, like being kicked in the liver.

But what was most surprising about the results, Lyons says, was the timing of that kick-in-the-gut reaction. It happened not when subjects were actually facing those dreaded arithmetic problems, but a few seconds before.

Subjects saw a yellow circle or a blue square, indicating whether a math or word question was coming their way. When they saw the shape and started anticipating a math problem, high-anxiety subjects' pain centers lit up. But once they actually started working on the problem, those brain centers retreated again.

"This underscores the fact that anxiety is very much about the psychological interpretation of an event or phenomenon, and not so much about the event itself," Lyons says. He and Bielock write that once people focus on solving an equation or other problem, they may not have the mental resources left over to keep feeling anxious. To stop the pain of anticipation, serious math-phobes—and perhaps the rest of us too—should just do it already.