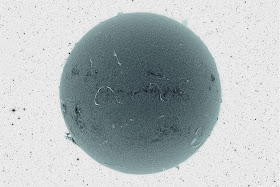 "Astronomy! People go crazy studying that!" a Christmas tree farmer said this week after asking my younger sister her college major. He made a head-exploding gesture to illustrate his point.

That farmer might have been distressed by this image. Despite its similarity to sperm tackling an egg, it's really a color-inverted picture of our sun. The background is a field of stars, also with its colors reversed.

Turning the colors around lets us see features on the sun's surface we might not otherwise. The little bumps and crinkles are called granules; they're where hot gas is rising to the outside of the sun before cooling and sinking again. According to a textbook of my sister's, these bumps are "typically the size of Texas."

The image comes from NASA's Astronomy Picture of the Day, which provides new head-explosions every 24 hours.