Aphids Always Land on Their Feet 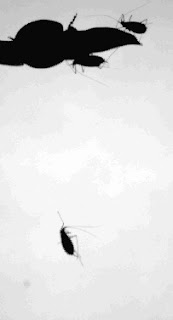 Pea aphids are even better at "stop, drop and roll" than elementary-schoolers. When a threatening ladybug or grazing deer approaches the stem where an aphid is sucking sap, it lets go and plummets toward the ground. By holding its limbs in just the right way, though, the insect can tumble into an upright position before sticking the landing.

The ground is a dangerous place for a small wingless animal, so it might help a falling pea aphid (Acyrthosiphon pisum) to hit it running. Or, better yet, to land feet-first on a lower leaf and never reach the ground at all. A group of scientists in Israel subjected pea aphids to predator scares, bouncing falls, and amputations to investigate their cat-like maneuvering.

In one experiment, the researchers placed a ladybug onto a fava bean plant where aphids were feeding. They covered the ground below with petroleum jelly so the insects would be caught however they landed.

As the ladybug crawled up the plant, alarmed aphids dropped to the ground. Falling from 20 centimeters, nearly every aphid landed right side up—"like a defenestrated cat," the authors note cheerfully.

If a live aphid is like a cat, a dead one is closer to buttered toast. The team used tweezers to drop upside-down aphids from 35 centimeters up. Some aphids started out alive and well; others were dead. The third (and least fortunate) group of aphids were still alive but had their limbs and antennae removed with a razor blade. Among the living, limbed aphids, 95 percent landed upright. Only about half of the dead aphids did, though. The number was even lower for the limbless group, reduced to flipping through the air like sesame seeds.

High-speed photography and mathematical modeling revealed the secret of the pea aphid. After letting go of a plant, it stretches its antennae forward and reaches its hind legs back and up. Then it freezes.

This position, the researchers discovered, it only aerodynamically stable when right side up. Holding its appendages stiffly in position like a skydiver, the falling insect will tumble until it's belly-down. Then it stays that way until it lands, the authors report in Current Biology.

"I was surprised and impressed by the simplicity of the righting mechanism," says Gal Ribak, a biologist at the Israel Institute of Technology and one of the lead authors. To land upright, the aphids only need to assume the right pose and stay that way. "All the rest is taken care of with the help of air resistance and gravity."

To see whether falling upright helped aphids land on a safe leaf, instead of going all the way to the groung, the researchers dropped insects directly over leaves. Those that were feet-first when they hit a leaf were able to stick the landing about half the time. When turned the wrong way, though, the aphids were guaranteed to bounce off the leaf and into danger.

The real danger in the lab, of course, came not from predators on the ground but from the scientists, who now snipped the ends off the aphids' legs to see if sticky pads there were helping them land. Once their wounds stopped oozing, the insects took another trip through the air. This time only 1 out of 20 caught the leaf.

Ribak studies animal locomotion within the university's department of aerospace engineering. That's because pea aphids, with their aerodynamical tricks, may have something to contribute to aircraft design. The species is also known for apparently capturing energy directly from the sun, something that's usually impossible if you're not a plant. Technologically, when it comes to these falling insects, we may never catch up.