The Evolution of Humans and Lice in 13 Reality TV Titles 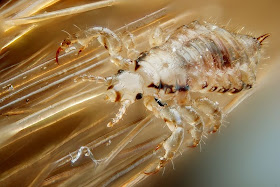 Humans and our lice are even closer travel companions than Kourtney and Kim when they took New York. The parasites cling to us more tightly than Paris Hilton's new BFF. They've been such cozy acquaintances of ours, in fact, that the story of human evolution is written into their genes.

That's what Marina Ascunce and other researchers at the University of Florida found when they sampled lice from around the world and compared their DNA. In the chromosomes of these wingless bloodsuckers, they discovered a window on human culture almost as good as a flip through the TV guide.

Fear Factor
"Lice" is a four-letter word that can inspire dread in the hearts of kindergarten teachers, moms and dads, and well-coiffed middle schoolers. An infestation of head lice is usually harmless, if horrifying. Ascunce and her coworkers point out, though, that head lice in the United States, Nepal and Ethiopia have been found carrying disease-causing bacteria.

What Not to Wear
More dangerous than head lice are body or clothing lice, which mostly affect the homeless and people living in refugee camps. These lice can carry at least three kinds of bacteria that are dangerous to humans. Over the past few decades, the authors write, there have been several disease outbreaks tied to body lice—including an outbreak of epidemic typhus (caused by the bacterium Rickettsia prowazekii) in Burundi that sickened more than 45,000 people.

Body and head lice belong to the same species (Pediculus humanus). Yet the two subspecies, like knockoff shows on different TV channels, make up separate populations that don't encounter each other in nature.

The Pickup Artist
The researchers used lice that had been plucked off of humans in 11 locations around the world. Head lice came from a few sites each in the United States, Asia, and Europe, plus Honduras. There were also body lice from Nepal and from a homeless shelter in Canada, for a total of 93 lice.

The Bachelor
Incidentally, head lice infestations usually include more females than males. It's not clear why, but when you have lice, your scalp is like one big rose ceremony.

House Hunters International
By letting them stow away in our hair while our own species migrated around the world, we've created unique geographic populations of lice. The head lice in this study fell into into three distinct groups based on their shared DNA. Asian lice (from Thailand, Nepal and Cambodia) made up one group. Lice from Honduras were another distinct group. Lice in the United States, though, were in the same genetic cluster as those from Europe.

Temptation Island
Louse DNA shows plenty of evidence of inbreeding. This isn't too surprising when you consider that populations reproduce as fast as they can while staying marooned on one person's head (and that new infestations can result from just one egg-bearing female crawling onto a fresh scalp). The most-inbred lice were found in New York.


19 Kids and Counting
Compared to their highly inbred head cousins, body lice showed a little more diversity. One reason for this, the authors point out, may be that body lice have more young. A female head louse can leave 150 eggs nestled and glued into her host's hair; a female body louse may leave twice that many eggs in the seams and hems of a person's clothing.

MXC: Most Extreme Elimination Challenge
Another factor that has probably contributed to low diversity in lice populations is our ongoing effort to kill them. Head lice infestations have increased around the world, the authors write, in part because the bugs have developed resistance to the insecticides we dump on kids' heads. A dousing with poison may leave behind a few hardy lice, which can then repopulate the whole area. (Biologists call this kind of population narrowing and regrowth a "bottleneck.")

Actually it has nothing to do with lice, but did you guys know this was a real show?


The Real World: Boston
The American lice sampled by Ascunce and her colleagues (from New York, San Francisco, and Florida) were a genetic match to the European lice (which came from Norway and the United Kingdom). If this pattern holds up across the United States and Europe, it would suggest that the lice Americans carry traveled to the New World along with European colonists. In other words, we have Columbus's lice.

Sarah Palin's Alaska
The genetically distinct lice found in Honduras, though, don't seem to have come over with the pilgrims. The authors think it's possible that the Honduran bugs represent the native American lice. Perhaps they came here on the heads of more ancient humans who crossed into this continent from Asia, traveling across the Bering Strait and down through Alaska long before Europeans arrived.

Wife Swap
An earlier study of louse mitochondrial DNA (genetic material that's only passed through mothers) turned up a distinct genetic group that's present in Europe, Australia, and the New World, but not in Africa. It's possible that this DNA, rather than having come from the lice our most ancient ancestors carried out of Africa, represents lice those humans picked up while hobnobbing with Neanderthals on their way through Eurasia.

Survivor: Heroes vs. Villains
The story of our conflict with lice is a classic one. As long as the insects keep developing resistance to our poisons and fighting back when we try to kill them, this series isn't likely to ever get canceled.

This post has been submitted to the 2013 blog contest held by the National Evolutionary Synthesis Center (NESCent).
Elizabeth Preston on Tuesday, March 05, 2013
Share