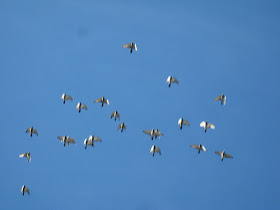 A young homing pigeon must learn quickly how to find its way home from the strange neighborhoods where humans insist on leaving it. At first the bird does this by relying on its crudest instincts, returning to its roost along a route full of youthful zigzags. Over time, though, it refines its methods. A mature pigeon takes a much simpler route, because it has drawn itself a more complex map.

Homing pigeons have been subjected to all kinds of research. The latest study used GPS devices, which the birds carried in little Teflon backpacks. Ingo Schiffner of the Queensland Brain Institute and Roswitha Wiltschko of Goethe-Universität Frankfurt studied pigeons at three different ages: juveniles (6 to 7 months old), yearlings (the same pigeons in their second year of life, after going through a training program), and older trained birds (at least two years of age).

Wearing their tracking harnesses, the birds were released from various sites that ranged from 3.2 to 23.5 kilometers away from their home loft in Frankfurt, Germany. Here are the routes some of the birds took when returning to their home (the square) from a release site 6.8 kilometers away (the triangle): 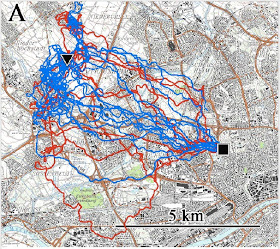 You'll notice that some pigeons traveled by more, shall we say, scenic routes than others. The researchers calculated each bird's "efficiency" and found that the youngest group of pigeons were the least direct fliers. On average, they traveled more than three times the distance of a straight-line trip between the two points. (The pigeon researchers, in a bit of a mixed-species metapor, refer to this ideal trip as a "beeline.")

The two older groups of birds were much more efficient, flying no more than 25 percent farther than they needed to. Since their youthful zigzagging days, they had gone through a training program that had them practicing as far as 40 kilometers from their home roost. Now more familiar with the features of the landscape around their home, they could navigate it easily.

But that didn't mean the pigeons stopped refining their internal maps after their first year. Schiffner and Wiltschko also calculated something called the "correlational dimension," which is the number of factors that seem to be contributing to a system—in this case, pigeon navigation.

Previous research has suggested that homing pigeons have multiple tools in their navigational toolkit. In various experiments, "pigeons have been deprived of visual cues, magnetic cues, olfactory cues, infrasound cues, and their gravitational sense," Schiffner says, "yet pigeons are still able to find their way home." Rather than relying on just one tool at a time, they seem to use several.

The correlation dimension is meant to count how many tools each pigeon uses to complete a trip. The youngest pigeons usually hovered close to 2. But year-old pigeons had a somewhat higher score, and the oldest pigeons were closer to 3. In his previous research, Schiffner says, pigeons have seemed to use as many as 4 types of navigational cues simultaneously.

This suggests that pigeons keep refining their mental maps as they age, adding new elements—visual landmarks, say, or the smell of a local factory—to others such as sunlight and magnetic fields. "I cannot say yet which factors pigeons are using," Schiffner says, but he believes the factors add up with age. He and Wiltschko report their results in the Journal of Experimental Biology. Schiffner adds, "I assume that pigeons continue to learn and integrate new information into their navigational map as they grow older."

Attaching GPS devices to animals is currently trendy; there's a whole new journal dedicated to the subject. But humans have a long history of rigging our technologies to pigeons. At the start of the 20th century, German apothecary Julius Neubronner designed and patented a little camera on a harness for homing pigeons to carry (he had previously used the birds to ferry prescriptions and drugs for his patients).

The German military toyed with using Neubronner's pigeon-camera technology for reconnaissance during World War I. With the cameras hooked to timers, the birds could take pictures above enemy lines and carry them back home. These days we're attaching our instruments to the accommodating birds not for the sake of spying on our enemies, but to decode the secrets of the pigeons themselves. 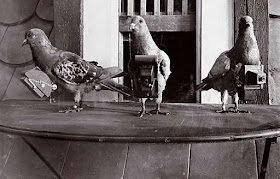