The Shambulance: Reflexology and Other Stories

The Shambulance is an occasional series in which I try to find the truth about bogus or overhyped health products. Helping me keep the Shambulance on course are Steven Swoap and Daniel Lynch, both biology professors at Williams College. 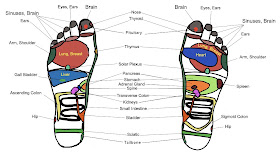 Sticking a Q-tip up one’s nose is not the source of many great insights. Yet it’s how an American doctor in the early 20th century developed the theory that became modern reflexology. He would be proud—though maybe a little confused—to see people today flocking to reflexology spas, where practitioners treat all their problems via the soles of their feet.

The American doctor in question was William H. Fitzgerald, an ear, nose and throat specialist. In a 1917 book, he explained the genesis of his big idea:


Six years ago I accidentally discovered that pressure with a cotton tipped probe on the muco-cutinous margin (where the skin joins the mucous membrane) of the nose gave an anesthetic result as though a cocaine solution had been applied . . . Also, that pressure exerted over any bony eminence of the hands, feet or over the joints, produces the same characteristic results in pain relief . . . This led to my ‘mapping out’ these various areas and their associated connections and also to noting the conditions influenced through them. This science I have named "Zone Therapy."

Chapter titles from Zone Therapy include "Zone Therapy for Women" (tongue depressor into the back of the throat for menstrual cramps), "Painless Childbirth" (rubber bands around the toes, among other interventions) and "Curing Lumbago with a Comb."

A nurse and physical therapist named Eunice D. Ingham extended the idea of zone therapy in the 1930s and 1940s, eventually mapping the entire body onto the soles of the feet. She called each important point on the foot a “reflex” because it reflected back to a certain organ or body part. Ingham wrote two books on the subject, now called reflexology: Stories the Feet Can Tell and Stories the Feet Have Told.

Today, the International Institute of Reflexology describes its practice as as “a science which deals with the principle that there are reflex areas in the feet and hands which correspond to all of the glands, organs and parts of the body.” Stimulating these points “can help many health problems in a natural way.” The site insists, “Reflexology…should not be confused with massage.”

There has been some confusion and blending, though, between Western reflexology and traditional Chinese medicine. Ingham and Fitzgerald's idea of "zones" is similar to the Chinese principle of "meridians." In traditional Chinese medicine, meridians are paths that carry qi through the body and connect the acupuncture points. Reflexology groups like to say that Fitzgerald "rediscovered" the science from more ancient roots. They even claim that ancient Egyptians practiced it, based on tomb paintings showing people holding each other's feet.

Whoever thought it up first, the idea that the soles of your feet hold a miniature map of the entire rest of your body defies a scientific explanation.

“The problem is communication,” says physiologist Steven Swoap. “How does the foot talk to the pancreas?”

“But in no instance do those sensory nerves bypass either the spinal cord or the brain and go directly to the liver, or the kidney, or the colon,” Swoap says. This means your foot can’t communicate directly with any other body part except your spinal cord or brain. Whatever stories the feet have told, they’ve had a limited audience.

Daniel Lynch, a biochemist, points out that sex organs are missing from some reflexology maps. “Why aren’t the gonads on there?” he asks. Other maps label a "testes and ovaries" region around the middle of the heel, but there's variation from one chart to the next.

Setting aside the map itself, Lynch says, “Where is the evidence that it actually works?”

The evidence is slimmer than a stiletto heel. In a 2011 review paper, complementary medicine researchers at the Universities of Exeter and Plymouth dug up every scientific study of reflexology they could find. Out of 23 randomized clinical trials, only 8 “suggested positive effects.”

The quality of the studies was “variable,” the authors write, “but, in most cases, it was poor.” Only four studies that found a positive effect used a placebo control—that is, did massaging the feet without regard to “zones” give patients the same symptom relief? In general, studies tended to use small groups of subjects and not to be replicated by other researchers.

Reflexology has been tested on conditions including asthma, premenstrual syndrome, irritable bowel syndrome, multiple sclerosis, and back pain. If reflexology does have a benefit, “The most promising evidence seems to be in the realm of cancer palliation,” or making patients more comfortable, the authors write. Overall, though, they found no convincing evidence that reflexology has power beyond the placebo.

Not that we should thumb our Q-tip-free noses at the placebo effect. The body has an impressive power to make itself feel better based on our expectations. A foot rub from a professional may very well ease a person’s pain. If that professional says anything about zones, though, it’s only a story.