Everyone Underestimates Fast-Food Calories (But Especially at Subway) 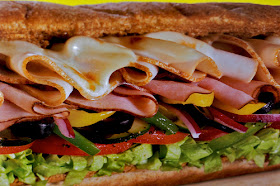 At a McDonald's shareholder meeting last week, a nine-year-old girl accused CEO Don Thompson of sneaky advertising. Stop "tricking kids into eating your food," she demanded, saying that McDonald's ads tell kids to "keep bugging their parents" until they get that Happy Meal. In the world of fast-food chains, though, the golden arches may not be the sneakiest purveyor of excess calories. Diners in all kinds of fast-food restaurants underestimate the calories they're taking in—and the most dramatic underestimation happens at Subway.

Thompson may not have been swayed, but Jason Block of Harvard Medical School and a group of other researchers writing in BMJ do care what consumers think about their fast food. Specifically, they care how many calories people think they're eating. To find out, they went into the trenches: 80 fast-food restaurants in New England cities.

Researchers stood outside their chosen dining establishments (which included McDonald's, Burger King, Subway, Wendy's, KFC, and Dunkin' Donuts) in 2010 and 2011. They asked customers on their way in whether they'd be willing to save their receipts and answer a few questions when they came back out. (Only a few restaurants kicked the researchers off the premises.) At dinnertime, they targeted adults, either eating on their own or with kids. At lunchtime and after school let out, they went to fast-food places within a mile of a school and talked to adolescents.

In all, more than 3,000 people participated. Across all the restaurant chains, the average dinnertime meal for adults was 836 calories, and the average afternoon meal for adolescents was 756 calories. Yet when asked how many calories they thought their meals held, people consistently guessed too low. And the bigger their meals were, the more severely they underestimated.

The researchers also asked subjects whether they'd noticed any calorie information indoors. "All of [the chains] provide information in some way," says Block—"on a wall poster, on napkins/cups, on sandwich wrappers and tray liners, and on 'special menus' that might present items that are below a certain number of calories."

Yet less than a quarter of adults said they'd even noticed this information. Those people didn't do any better at estimating their calories than others. Did they use the information to help them make menu choices? Only five percent of all adults said yes. Of adolescents, two percent.

Block says it's easy for diners to miss the calorie information provided by fast-food chains today. But soon, as part of the Affordable Care Act, all chain restaurants with more than 20 locations will have to post calorie information in a standard format. "The menu labeling regulation will require the calories to be up front and highly recognizable," Block says.

Even this kind of prominent labeling has had mixed results in past studies. However, Block adds, the new law will also require menus to post an "anchoring statement" pointing out that people only need about 2000 calories a day. This might make, say, the 970 calories in a Wendy's Baconator more meaningful to a customer.

Anchoring was effective in at least one small study, Block says. Other studies have looked at "traffic light" labeling (in red, yellow, or green), or listing calories in terms of how much exercise you'd need to burn them back off. "We'll be in a position to know much more after the federal law is implemented," Block says. His group is collecting data this year and next year to see how well the new labeling works.

If people do start noticing how many calories their favorite chains are offering, they may be surprised. When researchers broke down their results by restaurant chain, they found that people underestimated their calories more dramatically at some restaurants than others. At McDonald's, adults guessed too low by an average of 100 calories, and adolescents by a little more than 200. The guesses were off by a bit more, on average, at Burger King and Wendy's. At Subway, the errors were most extreme: adults underestimated their calories by an average of about 350, adolescents by close to 500.

Five hundred calories is equivalent to all the bread in a 12-inch sub (or, if you opt for multigrain, all the bread plus four American-cheese triangles). It's a lot not to know you're eating. This mistake, the authors write, may happen because people view Subway with a "health halo." After seeing TV ads featuring fresh vegetables, smiling Olympians, and Jared's old pants, consumers may think they're making a healthier choice than they are.

The new calorie labeling could help most in places like this. A fast-food chain that brands itself as healthy is even sneakier than someplace like McDonald's, which even little girls know is bad for you.