Moths Wait until Bats Lock On, Then Jam Their Sonar 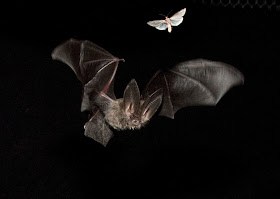 If you are a human reader, you've probably never seen your lunch put up an invisibility shield and perform an evasive maneuver just as you reached for it. But spare a thought for the bats. If your peanut-butter sandwich were anything like a tiger moth, you'd have a hard time finding a meal.

Several kinds of insects are able to detect the echolocation calls of a bat that's approaching like an enemy submarine. Moths may fly in another direction if they hear a bat nearby, or even drop into an escape spiral. Some species of tiger moth, while making their dramatic maneuvers, also make clicking sounds that jam a bat's sonar.

"Jamming is the most effective defense against bats ever documented," says Aaron Corcoran, a postdoc who studies echolocation at the University of Maryland. The moths generate "bursts of ultrasonic clicks" like machine-gun fire—as many as 4,500 clicks a second—and those clicks mix with the echoes from the moth's body that the bat is listening for. "This distorts the echo signature, effectively blurring the acoustic image in the bat's brain," Corcoran says.

In a study published in PLOS ONE, Corcoran and his coauthors examined the timing of that jamming signal: how does a tiger moth decide when to start clicking? If it throws around its sound effects too freely, the moth risks drawing attention to itself (usually a bad idea for a prey species).

The researchers secured Bertholdia trigona tiger moths in dark chambers and played recordings of echolocating bats, observing which bat signals triggered clicking from the moths. Then they went into the woods and hung the moths on tethers from a device not unlike a giant fishing pole. (After each moth was "hoisted into the air," the paper explains, "the pole was shaken periodically by the experimenter to add motion to the tethered moth and to keep the moth flying.") Also hanging from the pole was a tiny microphone, which let the researchers record the sounds of approaching bats--as well as bats snagging nearby, non-tethered moths.

In a bat's hunt, there are three main phases: the search, when the bat scans the area with sonar; the approach, once the bat has found a target and begins sending faster, more intense sound pulses at it; and the "terminal buzz" as it homes in to make the kill.

The researchers found that tiger moths, dangling from their fishing poles, liked to start their sonar-jamming clicks early in the approach phase. "This allows the moth the maximum amount of time to jam the bat," Corcoran says. It also lets the moth make sure the bat's sonar is aimed at itself, and not at a nearby, less fortunate insect. Corcoran says, "The interesting part to me is that the moths appear very well adapted for determining precisely when they have been targeted by a bat."

Once a moth takes action, the approaching bat is in trouble, Corcoran says. A tiger moth sending out a jamming signal is about 10 times more likely to escape its pursuer than it would be otherwise. In his study, moths that sent out jamming clicks and simultaneously made an escape dive "got away every time." It's enough to make a hungry bat wish it had packed a sandwich.

Image: by Aaron Corcoran. You can find more photos, videos, and other tidbits at his website.
Elizabeth Preston on Tuesday, June 11, 2013
Share