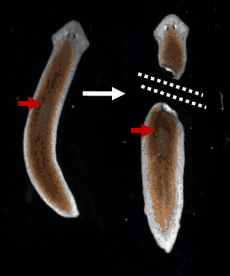 How good are you at remembering something you learned two weeks earlier? What if during the intervening 14 days, your head was removed? One flatworm isn't bothered by this scenario. After growing back its entire head and brain, it picks off pretty much where it left off.

The planarian is a modest little flatworm, the kind of common microscope denizen you might find in a Gary Larson cartoon. What's remarkable about it is its ability to regenerate. The whole body can regrow, head to eyespots to tail, from even a tiny fragment of the original animal.

Tal Shomrat and Michael Levin at Tufts University built a computerized apparatus for training planarians. Back in the 1960s, an intriguing line of research had suggested that the worms might be able to retain memories after decapitation. But researchers had done their training and testing by hand, a cumbersome method that led to inconsistent results. ("The process of training worms by hand is very time-consuming," Levin says, probably understating it.) Ultimately, the topic was abandoned. Now, with a totally automated procedure, Shomrat and Levin hoped to study planarian memory with less error and greater numbers of worms.

First, their worms spent 10 days getting familiar with one kind of environment, either a regular petri dish or one with a rough floor. They were fed abundantly so that they'd learn a positive association with their home environment. Then, for testing, they were put in a rough-bottomed dish with a little spot of food in the center and a light shining on it. Planarians like to stick to the periphery, and they hate light, so they needed to overcome both aversions to get the food. As expected, worms that were more familiar with the rough dishes reached the food sooner, as measured by video tracking.

When the researchers tested the worms again 14 days later, they found that the worms trained on a rough-bottomed dish were still more comfortable with it than the other worms. This memory seemed to last for at least two weeks. Perfect—that's just enough time for a planarian to lose its head and grow it back.

The worms were relieved of their heads. The scientists made certain that no bit of brain survived. Then, after the worm stumps had painstakingly re-headed themselves, the planarians went back into the testing chamber.

The memory wasn't there right away. But Levin and Shomrat found that if they gave all the worms one quick training session before testing, worms who'd previously been familiarized with rough petri dishes reached the food significantly faster than the other worms. The training session "basically allowed the worms to refresh their memory of what they had learned before decapitation," Levin says. In other words, their memories had survived the loss and regrowth of their heads.

Levin doesn't know how to explain this. He says epigenetics may play a role—modifications to an organism's DNA that dial certain genes up or down—"but this alone doesn't begin to explain it."

It's a mystery, Levin says, how a chemical tweak somewhere outside of a worm's brain can later be translated into information, such as the knowledge that a bumpy environment means food is nearby. "We don't have an answer to this," he says. "What we do show evidence of is the remarkable fact that memory seems to be stored outside the brain."