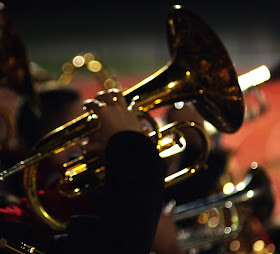 It wasn't only James Bond. Nine months after suffering a stroke, a 45-year-old happened to notice that the wailing horns in a Bond movie's opening credits gave him strange, ecstatic feelings. But any high-pitched brass instrumentals would do the trick. A musical segment during the Beijing Olympics gave him the same feelings. The man's doctors came to realize that when his brain rebuilt itself after the stroke, he had developed synesthesia.

Associating letters or numbers with specific colors is the most common kind of synesthesia. Other sensory combinations, like experiencing tastes when hearing certain sounds, are rarer. In some cases, colors, sounds, or other sensations may trigger emotions.

The recovered stroke victim, whom doctors and researchers at St. Michael's hospital in Toronto described in the journal Neurology, turned out to have more than one trigger for his emotional synesthesia. High-pitched horns gave him very good feelings, but words written in the color blue made him feel "disgusted." Yellow words were also disgusting, though a little less so.

To confirm what the patient said he was experiencing, the authors did fMRI scans of his brain, along with six non-synesthetic subjects of the same age. All the subjects listened to the Bond theme in the scanner, and their brain activity was compared to what happened when they heard a solo euphonium—a tuba-like instrument that didn't excite the patient at all.

Control subjects responded to the Bond theme no differently than the euphonium, but the stroke victim's brain had a much stronger response to the theme song. The activity in his brain, spread out across many different areas, fit with "intense emotional arousal," the authors write, "rather than simply...a pleasant musical experience." Apparently, the music really was sending him to double-oh-heaven.

In the scanner, subjects also viewed blocks of text written in yellow, blue, or black. While control subjects' brains didn't respond differently to the different colors, the synesthetic man's brain did. His neural activity when reading blue or yellow words suggested he was processing an emotional stimulus, the authors say.

There's only been one other case recorded of someone developing synesthesia in mid-life. That person's experience—a tingling sensation when hearing certain sounds—also came after a stroke. Both patients had damage in the same region of their brains: the thalamus. Tom Schweizer, director of neuroscience research at St. Michael's hospital and the lead author of the paper, says this is significant.

Schweizer describes the walnut-sized thalamus as a "central relay station" for the brain. It's densely packed with fibers that connect neurons in different brain regions. Schweizer thinks that in trying to repair itself after the stroke, the thalamus may have gotten some wires crossed.

The patient's synesthesia isn't exactly like traditional synesthesia, which develops in childhood. For example, he's able to suppress his feelings if he tries, while synesthesia is usually defined as involuntary. Nevertheless, Schweizer says this case "could be a rare window" into how synesthesia develops and the role the thalamus might play.

Even the authors of the study couldn't resist a Bond pun, titling their paper "From the Thalamus with Love." (Why not "License to Thrill"? Or "Dr. No...More Jokes Please; Don't You Know This Makes It Really Awkward When People Invite Me to Jazz Concerts?") Yet his case gives a serious clue as to how the brain's wires can get double-crossed.