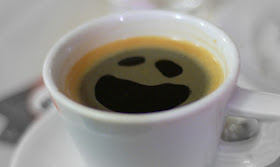 Does anyone still say "full of beans"? The phrase is supposed to describe someone who's upbeat and energetic. Maybe we can revive the expression by attaching it specifically to coffee beans, as in, "I just had a double-shot cappuccino and boy, oh boy am I full of beans!"

Caffeine lovers know the feeling of finishing a well-timed cup of coffee or tea: positive, alert, ready to go. (And maybe ready to go to the bathroom.) New research suggests that our brains also process language differently after having caffeine. We're quicker and more accurate at recognizing words—but only if those words have positive connotations.

Lars Kuchinke and Vanessa Lux, researchers at Ruhr University Bochum in Germany, studied the effect of caffeine on a word recognition challenge. To start, they recruited 66 subjects with a range of personal caffeine habits.

Leading up to the experiment, subjects abstained from coffee (and nicotine and alcohol) for at least 12 hours. Thirty minutes before the experiment started, each subject took a pill that contained either sugar or 200 mg of caffeine. That's the equivalent of 2 to 3 standard cups of coffee, or a bit less than 1 tall coffee at Starbucks. Subjects didn't know which pill they'd taken.

Then subjects sat facing a screen with their chins on a chin rest. While they focused on a spot in the center of the screen, words flashed briefly on one side or the other. Half the time, these were emotionally positive, negative, or neutral German words. The other half the time, they were nonsense words that looked similar to German ones. Subjects pressed a button indicating whether the word they'd just seen was real or not.

On the whole, people performed better on this task when the words flashed in front of their right eyes. This was expected, based on previous experiments and the fact that the right eye connects to the left hemisphere, the brain's language headquarters. What was more interesting was that on left-hemisphere trials, people who had taken a caffeine pill were significantly better at recognizing positive words than neutral or negative ones.

The researchers think the effect is down to dopamine. In addition to waking you up and making you quicker and more accurate at cognitive tasks, caffeine increases the activity of dopamine, a signaling molecule in the brain. (This may also be why caffeine drinkers say it improves their mood.)

Previous studies found that the brain is a little better at recognizing positive words (and happy faces) in general. Adding caffeine—and therefore dopamine—exaggerated this effect. Kuchinke and Lux think this is because dopamine interacts with the brain's language centers to make us quicker at processing positive words. They haven't yet studied how caffeine affects our understanding of outdated idioms.