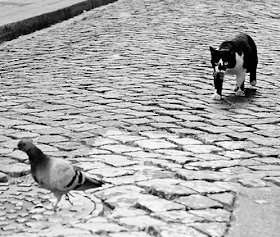 Moving from a rural home into the city brings challenges like figuring out trains, maneuvering couches up staircases, and not being eaten. Birds that move into urban homes have to worry about a different set of predators than their relatives in the countryside do. Although they haven't learned how to avoid hungry truck grilles, urban birds have evolved some new tricks that help them dodge the claws of predatory house cats.


For a bird living in a rural habitat, the main threat is birds of prey. But when that same bird moves to a city, it's much less likely to get snatched from above by a swooping hawk or falcon. Instead, it has to contend with roaming cats. The American Bird Conservancy says that cats (both pets and strays) kill hundreds of millions of birds each year in the United States alone.

To find out whether urbanized birds have evolved in response to their new predators, a pair of researchers captured birds inside and outside of two cities: Brønderslev, Denmark, and Granada, Spain. The researchers are Juan Diego Ibáñez-Álamo, at the University of Granada, and Anders Pape Møller at Paris-Sud University. Using mist nets and traps, they collected 1132 birds.

Each time a bird was caught, a researcher immediately collected and tested it. By simply holding a bird in their hands briefly, the scientists could score all the ways it responded to capture. Did the bird scream out distress calls? Bite? Shed its feathers? When released, did it fly off right away or lie frozen in panic?

The researchers collected members of 15 bird species that lived in both the city and the country. For each of these species, they compared the behaviors of urban and rural birds to determine how the birds had adapted since moving into the city.

Like newly minted Manhattanites learning to keep their doors locked, urban birds have developed new safety habits, the authors report in Animal Behaviour. One such habit is screaming bloody murder. When researchers seized city birds and held them in their hands, the birds were much more likely to make alarm calls and "fear screams" than birds of the same species that lived in the country. Møller and Ibáñez-Álamo think this behavior has evolved because in the city, birds live close to their relatives instead of dispersing widely. Families that alert each other to predators keep their genes alive.

Other habits that may have helped birds escape from raptors when they lived in the country—namely, biting and wriggling around when caught—were less common in city birds. (I'm guessing biting was not as uncommon, however, as the researchers holding the birds would have liked.)

Urban birds also showed off a trick that was less common in their rural relatives: shedding feathers. This trait seems to help deter hungry cats. When finding yourself in the mouth of a house cat is a real danger, being able to shimmy away and leave that cat with a mouthful of feathers will help you survive.

Some of the bird species studied had lived in the city since the late 19th century, while others had only moved in during the 21st century (according to local bird experts who'd monitored their populations). For a couple of the escape behaviors they studied, the researchers were able to see changes increasing over time: birds that had spent a lot of generations in the city had changed more dramatically than recent immigrants had.

This suggests that as birds and other animals continue to reside and reproduce in the city, they'll keep evolving in response to their urban predators. If we give them long enough, maybe they'll even figure out how to escape cars.