The Shambulance is an occasional series in which I try to find the truth about bogus or overhyped health products. With me at the wheel of the Shambulance are Steven Swoap and Daniel Lynch. 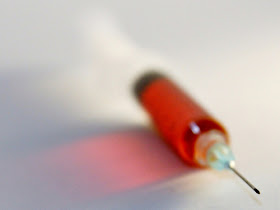 The injections he'd been receiving in the buttocks during his major-league baseball career, pitcher Roger Clemens explained to a jury this summer, were not steroids. They were perfectly legal and innocent shots of vitamin B12. The jury acquitted him, lifting the weight of a felony perjury charge from his shoulders. You, too, can use B12 to put some spring back into your step—at least, if you believe the companies that market the injections for weight loss, energy, and general well-being. In reality, this is not a performance enhancer.

B12 is a quirky vitamin that you can't get from plants. It's manufactured by bacteria that provide their services to some animals by living in their guts. Humans mainly get B12 from meat, eggs, and dairy. Of course, this means vegan humans have to find the vitamin elsewhere, such as in fortified breakfast cereals or Flintstones chewables. (They might also ingest B12 from soil bacteria on vegetables that haven't been washed well.)

"Healthy individuals have a six-year supply of B12 stored in their liver," says Daniel Lynch, a biochemist at Williams College. So even a temporary shortage in your diet shouldn't harm you. Long-term vegans, though, can become deficient in B12. Some older adults and gastric-bypass patients who can't absorb enough B12 from their food need to get it from an outside source. And patients who suffer from a disorder called (oddly) "pernicious anemia" need B12 supplements.

B12 deficiency causes weakness and fatigue, and an injection of the vitamin reverses those symptoms. This has apparently led some people to conclude that healthy, non-deficient folks will also get stronger and more energetic by taking B12. Why settle for normal functioning when you could be a vitamin-powered superhuman?

"[Weekly] vitamin B12 injections are intended to crank up the metabolism and boost energy levels to increase daily activity and help weight loss even when the body is at rest," says one Chicago weight-loss center.  An "anti-aging" clinic asserts that "B12 injections are...an effective means of boosting the body's metabolism for those looking to lose weight."

You'll start by shedding weight in the wallet region: a 3-month course of shots from that office will relieve you of nearly $500.

It's true that vitamin B12 is involved in metabolism. However, according to the National Institutes of Health, "Vitamin B12 supplementation appears to have no beneficial effect on performance in the absence of a nutritional deficit."

In other words? "Basically, for any healthy person this is a sham," Lynch says. "Any excess B12 is peed out anyway."

Non-human animals store B12 in the liver, just as humans do. "So you could get the same effect of the injection by munching on liver," says Steven Swoap, a physiologist who's also at Williams College. "This is how they 'cured' vitamin B12 deficiency a hundred years ago."

If you still feel a craving for B12 but don't care for liver sandwiches, you can buy bottles of B12 pills—and they'll run you about five cents a tablet. "It begs the question as to why anyone would stick a needle in themselves when you can buy this stuff as a pill at the local drugstore," Swoap says. Maybe we can find a Hall-of-Fame-nominated baseball player to explain it.