Hack Your Wallet: Crisp Bills Are Harder to Spend 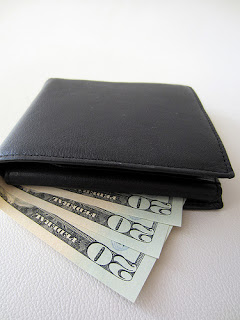 Do the strains of Bing Crosby's Christmas standards make you throw cash at salespeople until they give you something you can leave the mall with? Are pricey, between-department-store lattes your early gifts to yourself? Don't panic. Scientists have a way for you to hack your spending this holiday season.

We consumers, it turns out, are not always rational with our cash. Research in the past has suggested that people are more likely to spend the money they carry if it's in smaller bills. Larger bills seem to have value even in addition to their denomination. A $20 bill, for example, is a little harder to let go of than four $5 bills.

This idea is called the "denomination effect." But it's not the only factor that affects whether we save our cash or spend a little more. Two marketing professors, Fabrizio Di Muro at the University of Winnipeg and Theodore Noseworthy at the University of Guelph, investigated another factor: grubbiness. Do people assign extra value to crisp, clean-seeming bills, regardless of their denomination? And are people eager to get rid of—that is, spend—worn, dirty cash?

Previous research has provided a few reasons why this might be true. One study showed that consumers value an object less after it's been touched by other people. After someone else has had their paws on a product, even if they don't see the touching happening, people aren't willing to pay as much for it. As for currency itself, research has shown that most people think money is dirty—and they're not wrong.

In a series of experiments, Di Muro and Noseworthy tried to sort out consumers' real feelings about their cash. They report in the Journal of Consumer Research that crisp bills are keepers.

Participants in the first experiment tried to solve a series of puzzles and received a $10 bill at the end. Then they were offered the chance to wager their winnings on one final puzzle; if they got it right, they'd receive a $20 bill. Half the subjects started with a worn, crumpled $10 and were shown a crisp new $20 that they could win. Eighty percent of these subjects chose to gamble. The other half of the group had a crisp $10 and were offered a worn $20; less than a quarter of these people chose to gamble. Subjects were much more tempted to gamble their winnings, in other words, when it might have meant upgrading to a nicer-looking bill. (In reality, all the bills in the study were brand-new; the researchers had crumpled some of them until they looked old and worn.)

The researchers also found that the lure of a crisp bill could override the denomination effect. In a second experiment, subjects were given either a $20 bill or four $5 bills to "shop" with (in the lab). When their bills looked old, people with small bills spent more. But subjects with four crisp, new $5 bills spent less than those with a worn $20.

In a third experiment, subjects shopped with a wallet holding an assortment of bills. Most people don't like to break a larger bill if they have the right small bills to pay for what they want. But in this case, people with a larger bill that was old and worn were much more likely to break it unnecessarily. If the larger bill was crisp, almost no one did this.

Based on questionnaires after their experiments, the authors think that two emotions are at play. One is disgust: people think old, crumpled bills are dirty, and like to get rid of them in a hurry. The other is pride: people enjoy owning crisp new bills, and don't want to spend them.
(This sense of pride may be what led to a surprising twist: When the researchers repeated the final experiment but told subjects that they were being videotaped, those people were more likely to break their crisp larger bills. Imagining others' eyes on them apparently made people eager to show off their nice-looking cash.)

Overall, people tended to spend more and get rid of their cash more readily when they had worn, dirty-seeming bills. People with crisp, clean bills spent less and didn't like to break those bills unnecessarily—unless someone else was spying on them.

What does this mean for your wallet? Stocking up on crisp ATM bills, rather than taking cash back at the grocery store, might help you spend less. Keeping large bills instead of small ones will help too.

The government might be able to hack its own wallet, though, by following the opposite advice. The Federal Reserve regularly removes beat-up, grubby cash from circulation and replaces it with new bills. If it replaced worn bills less often, leaving everyone stuck with wallets full of grubby cash, maybe we'd all spend a little more money and give the economy a real holiday boost.