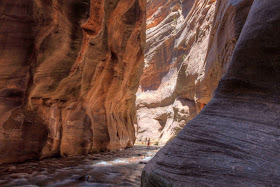 Stories about earth science have all the transformations and power struggles of a fairy tale. When I asked my friend Tyler Auer—a photography blogger who studied geoscience in college—to tell me the story behind a favorite photo, he sent me a tale that’s part Princess and the Pea and part Jurassic Park.

Tyler took this picture at Zion Canyon, one of the many national park areas (including the Grand Canyon) within the 130,000-square-mile formation known as the Colorado Plateau.

“Around the time the dinosaurs roamed the western US, the Colorado plateau was a giant sea of sand dunes,” Tyler says. Over millions of years, these sand dunes kept forming on top of one another and compressing into layered sandstone. You can see the outlines of the ancient dunes, like so many stacked mattresses, in the striations of the canyon walls.

While the sand dunes were turning to rock, they were also being pushed upward by tectonic activity. Cracks formed in the ground like the crust of a bread loaf in the oven. Zion Canyon began as one of these cracks. But “sandstone is really soft, as far as rocks go,” Tyler says, “and running water carves through it quickly.” Rainwater and the flow of the Virgin River gradually deepened this split into a half-mile chasm with almost vertical walls.

Since the Colorado Plateau may be the thickest sandstone layer that’s ever formed, it's provided nature with a deep toolkit. “The Colorado Plateau is magnificent example of the slow but beautiful work nature can do,” Tyler says. You can find more fairy-tale pictures at his blog.