Are You Healthy Enough to Be a Space Tourist? 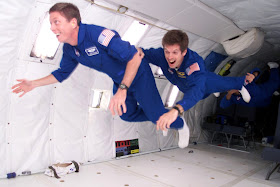 Space travel for regular folks is almost here. But before jumping on board the nearest spacecraft, amateur astronauts and their doctors might want to consider the health risks. Although standard air travel is more boring than spaceflight, it's also less likely to shrink your bones or deform your eyeballs.

"Practically only the healthiest people have flown in space so far," says Marlene Grenon, a vascular surgeon at UCSF who researches the effects of microgravity on the body. Government astronauts go through extensive medical testing and training. But even these extra-fit fliers have suffered ailments ranging from cardiac dysrhythmia to good old-fashioned vomiting. What's in store for the rest of us?

Grenon is the lead author of a paper in BMJ asking that question. The researchers say that doctors will have plenty to consider before sending their patients to boldly go where no civilian has gone before.

"Space motion sickness would be expected to be the most common" medical problem, Grenon says, "particularly for short-duration flights." If your inner ear is easily confused by sitting still in a moving vehicle, just imagine what happens when that vehicle has no up or down.* NASA's parabolic flights—trips on aircraft that fly in steep up-and-down waves, simulating weightlessness for astronauts in training and scientists researching low gravity—have earned the nickname "vomit comets" for a reason.

Life without gravity is hard on the bones and muscles as well as the barf reflex. NASA astronauts onboard the space station exercise for two hours every day to counteract bone loss, muscle atrophy, and a decrease in cardiovascular fitness. Grenon says she doesn't yet know how weightlessness might act on people who are less fit to begin with, or overweight.

Exercise may prevent muscle atrophy but it doesn't do much for squished eyeballs. A study last year found that after a six-month space mission, astronauts were likely to have "flattened globes" and other eye problems. The shifting of fluids inside the head, free to bounce off the walls just like the astronauts themselves, might be to blame. Even after shorter trips, many astronauts reported worsened eyesight.

The authors of the new paper name several medical conditions that might worsen in microgravity. For people with diseases of the blood vessels, fluids drifting around might be dangerous. Aneurysms could rupture during takeoff. Bone loss in space could be especially bad for people who already have osteoporosis. Acid reflux could worsen when the esophagus no longer knows which way is up. And don't forget radiation exposure.

But the most ordinary complaint that might ground you is an infection. Grenon writes that even people with simple ear or skin infections should consider postponing trips to space.

That's because the immune system changes during spaceflight, Grenon says. Although these changes are not well understood, they "could place the spaceflight participants at higher risk of infection." Additionally, she says, "Some research has also hinted [at] the fact that bacteria grow stronger in microgravity." And radiation might make people more susceptible to infection—or make bacteria mutate more quickly. Overall, the changes in space favor bacteria over your immune system. These risks would be greater on longer flights.

Still want to fly? Virgin Galactic is accepting reservations. If you're willing to put down $200,000 up front, you can still get a spot on their first round of flights. For a cool million you can reserve a private trip for yourself and five friends—that's a buy-five-spaceflights, get-one-free deal. Make sure you pack enough barf bags.

*For an exceedingly thorough discussion of space barfing, as well as other bodily functions performed in microgravity, I recommend Mary Roach's book Packing for Mars.
Elizabeth Preston on Monday, December 17, 2012
Share