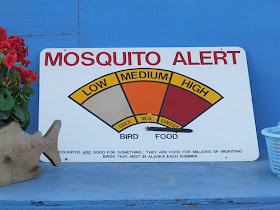 Think mosquitos have a special fondness for you? Do they choose to target you over adjacent humans? No matter how badly you have it, things might be worse if you were infected with malaria. New research in birds shows that malaria parasites somehow make their victims more attractive to mosquitos. After all, the parasite needs a lift to its next destination—so it forces its sick host to flag down a ride.

Malaria, one of the top killers worldwide among infectious diseases, isn't caused by a virus or a bacterium. The culprit is a one-celled protozoan, called Plasmodium, that comes in a couple hundred disease-causing flavors. Plasmodium falciparum is the species that causes most malaria deaths in humans.

Various other Plasmodium species infect birds, reptiles, and mammals ranging from apes to anteaters. Whichever animal it prefers, the parasite needs to travel to new hosts via the belly of a mosquito. If possible, Plasmodium shouldn't just rely on chance—it should encourage mosquitos to bite its host.

In a 2005 study, researchers found hints that mosquitos are more attracted to the smell of a malarial child than a healthy one. (This was only true once the parasite had reached the right life-cycle stage for spreading to other people.) Giving malaria to kids is hard to justify ethically, though, even if you then treat them with antimalarials as those researchers did.

To pursue the question without leaving behind a trail of sick children, researchers in France turned to birds. Author Stéphane Cornet, of the Centre d'Ecologie Fonctionnelle et Evolutive, says the avian malaria parasite the team used infects more than 30 bird species around the world. For their experiments, they used canaries.

Mosquitos could prefer sick animals simply because they're easy targets. "Infection often renders hosts lethargic, as we are when we feel sick," Cornet says, "so that they are less able to defend themsleves against [mosquito] attacks." But he and his coauthors were more interested in whether malaria changes the particular bouquet of an animal to tempt to passing mosquitos. So they placed all their canaries inside PVC tubes with only their legs sticking out. This way, the birds' behavior and appearance wouldn't matter.

Fifty canaries were divided into pairs. Then the researchers released 70 hungry female mosquitos into a cage with each pair of birds (or, from the mosquitos' perspective, a cage holding four bird legs). After the mosquitos had feasted, the authors checked the DNA of the blood in their bellies to find out which bird each mosquito had chosen. Every mosquito choice test was repeated three times.

After testing mosquitos on healthy birds, the researchers infected one bird in each pair with avian malaria and repeated the tests 10-13 days later, when the birds were sickest. Two weeks after that, they tested the mosquitos and birds a final time. By then, 9 birds had died. But the surviving infected birds had entered the "chronic" stage of infection, when the parasite lies low and the victim isn't as sick.

Mosquitos weren't any more interested in acutely ill birds than in healthy birds, the researchers found. This might have been because the malaria had driven down their red blood cell counts, making their blood less delicious to mosquitos. But once the canaries entered the chronic stage of malaria, mosquitos clearly preferred to feed on the infected birds. The authors report their findings in Ecology Letters.

Cornet believes malarial birds give off some signal to attract mosquitos, such as extra carbon dioxide or a specific odor. What exactly that signal is, and how the Plasmodium parasite manipulates its host into sending the signal, remains a mystery.

A canary is of course not a person, and their malaria parasites are different from ours as well. But there are similarities in how the two parasites act on their hosts, Cornet says. Humans, like birds, might give off some mosquito-enticing perfume when infected with malaria. Finding this perfume could help prevent malaria transmission in the future. And even before that happens, Cornet says, it's useful for people who model the spread of malaria to know that mosquitos aren't choosing their victims randomly.

If you're still feeling resentful toward mosquitos, it may help to know that the malaria "perfume" is really a trap. Mosquitos that carry Plasmodium parasites are about a third less fertile than they would be otherwise, another study this year found. Drinking from infected hosts is bad for mosquitos just like it's bad for the next animal they bite. But, like us, they're helpless to Plasmodium's wiles.