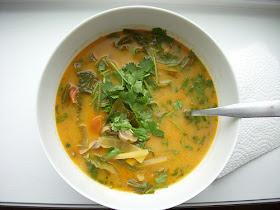 Regrettably, and despite what the Breatharians will tell you, a person can't live on a diet of air. But you can keep hunger pangs at bay, scientists say, simply with the power of memory. And feelings of nostalgia can help you withstand cold, according to another group of scientists. Now that winter is settling in, it might be a good time for all of us to start collecting some really good soup experiences.

Researchers studied the effect of nostalgia on body temperature in a series of experiments reported in the journal Emotion. People may describe their fond thoughts of the past as "warm feelings," but do they really mean it?

In one experiment, 64 subjects individually sat in a room kept at a cool 16 degrees C (60 F). They were asked to recall either a memory that made them nostalgic or an "ordinary autobiographical event." After taking some time to reflect on the memory and record their feelings, subjects estimated the temperature of the room. The ordinary-memory people guessed about 17 C (63 F). But the nostalgic ones put the temperature higher, at around 20 C (a comfortable 68 F).

Another group of 80 volunteers reflected on a nostalgic or non-nostalgic memory, like the earlier group had. Afterward, they had to plunge one hand into a bowl of ice-cold water and hold it there for as long as they could. The non-nostalgic subjects lasted about 20 seconds before yanking their hands out of the bowl. Those fortified by warm, nostalgic memories, though, stuck it out for an average of 26 seconds.

A separate study, published this week in PLOS ONE, looked at how memory affects hunger. Patients with severe memory problems, the authors note, sometimes eat one full meal right after another—without recalling what they've eaten, they apparently don't feel full. For people with intact memories, does hunger also depend on our memory of our last meal?

To find out, researchers at the University of Bristol relied on a trick soup bowl. A hidden pump in the bowl's base, connected to a tube under the table, let scientists sneakily refill or drain the bowl while subjects were eating (surely this is the plot of a Greek myth I'm forgetting).

Researchers gave 100 subjects a bowl of "creamed tomato" soup that initially held either 500 ml (about 2 cups) or 300 ml (1 1/4 cups). Half the subjects were allowed to eat their soup with no funny business. A quarter of them saw a bowl holding the larger amount of soup but only ate the smaller amount as their bowls were secretly drained. And the final group saw a small bowl of soup but ate a larger portion as it refilled.

Over the next three hours, subjects rated how hungry they felt. By the end, people who had seen a small portion of soup felt significantly hungrier than those who had seen a large portion—regardless of the amount they'd actually eaten.

This suggests, the authors write, that appetite is closely tied to our memory of what we've eaten recently. We take visual hints from our food about how full it will make us feel, and those hints can override the information coming from our stomachs.

If you don't have a magic soup bowl, you might still be able to use your memory to your advantage by paying attention to what you eat. Previous research has shown that watching TV, or otherwise distracting ourselves during meals, can make us hungrier later on. Taking in all the visual information from our plates, so we remember it later, can keep us feeling fuller. And, of course, recalling fond memories might make us warmer. Maybe all that time Eliza Doolittle spent standing on the street and singing about "warm face, warm 'ands, warm feet!" would have been better spent looking to the past.