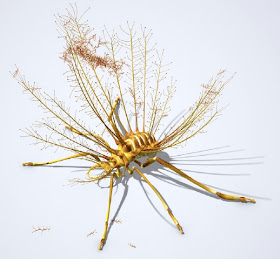 Covering yourself with garbage is a great way to look less delicious to predators. More than a hundred million years ago, one insect species took this strategy to the extreme by growing a kind of giant trash can on its back. Scientists could identify the new species thanks to a remarkable specimen that was preserved—along with an informative topping of trash—in amber.

The insect that kindly died in a blob of tree resin in early-Cretaceous Spain was a young green lacewing. Modern-day green lacewings are predatory insects common in North American and Europe. Before they develop their lacy adult wings, the larvae of some species protect themselves by carrying trash around. They collect plant material, insect carcasses, and other debris in their jaws, then twist their heads around to tangle the material into short appendages growing out of their backs. The trash camouflages them and provides a physical, untasty shield when predators (which can include ants, wasps, and cannibalistic green lacewings) attack.

But the Cretaceous lacewing was so wildly different from its modern-day relatives that scientists named it Hallucinochrysa—that is, an insect bizarre enough to seem like a hallucination. (For its second name they chose diogenesi in honor of Diogenes syndrome, a trash-hoarding disorder in humans. The disorder, in turn, is named after a Greek philosopher who lived in a tub.)

University of Kansas entomologist Michael Engel, one of the authors of the new paper in PNAS, describes the ancient lacewing's trash-carrying apparatus as "dramatic and unique." Unlike the short appendages on modern green lacewings, the old insects grew a thicket of extremely long, hairy tubes from their backs (illustrated above).

Coauthor Ricardo Pérez-de la Fuente, of the University of Barcelona, points out another unusual feature of the trash basket: the tiny hairs growing out of the tubes have "trumpet-shaped endings," which he says would have helped anchor the trash in the basket. Once the refuse was in place, it stayed there.

Almost as exciting as the hallucination-worthy insect was the collection of trash preserved with it. "What attracted our attention since the very beginning was the high density and intricacy of the trash packet," Pérez-de la Fuerte says. Peering into the amber with a microscope, the researchers identified the thread-like plant parts trapped on the insect's back as bits of ferns.

The plants seem to match a tropical group of ferns that, these days, move into areas swept clean by wildfire or lava. Since ancient wildfires also encouraged amber to form, and this particular sample was part of an abundant amber cache, it seems likely that the area had experienced fire. At least one trash-toting insect had filled its basket with bits of the ferns that sprouted afterward. Then this insect carried its garbage collection up into a tree and died.

Since the ferns lived on the forest floor, their remains would have been "extremely unlikely to be found otherwise," says Pérez-de la Fuerta. The day this little trash hoarder walked into a sticky tree was a bad one for the insect, but a very lucky one for scientists.