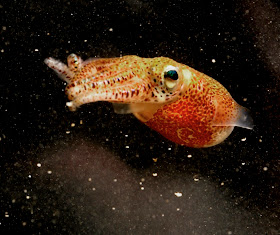 At nightfall, the Hawaiian bobtail squid digs itself out of the sand and rises into the ocean water like a spaceship taking off. It switches on its cloaking device: glowing bacteria inside its body light up, disguising the squid's silhouette against the moonlight for any predators swimming below. As sleek a vehicle as it appears, though, the bobtail may not totally outrank its microscopic crewmembers. The bacteria seem to power a clock inside the squid's body that can't function without them.

Hiding during the day and hunting at night in shallow Pacific waters, Euprymna scolopes clearly has a working circadian clock. Researchers had noticed, though, that the squid's light organ—the specialized pocket inside its body that houses its bacterial helpers—seemed to have a rhythm of its own. The Vibrio fischeri bacteria give off fluctuating amounts of light throughout the day, for one thing. And the bacteria have their own daily rhythm of gene expression (when various genes are turned on or off), explains Margaret McFall-Ngai, a microbiologist at the University of Wisconsin, Madison.

McFall-Ngai and her coauthors looked for genes linked to circadian rhythms within the squid. They found two types of "cry" genes, which are known to control internal clocks throughout the animal and plant kingdoms. One gene had a daily cycle of activity in the squid's head—which is what you'd expect, since animals' main circadian clocks are in our brains. Other clocks can be elsewhere in the body, though, and this is what researchers found with the second cry gene. It was cycling only within the light organ.

Baby squid, which hadn't yet collected bacterial friends in their light organs, didn't show the same cycling. So it seemed that the bacteria themselves were driving the daily rhythms in the light organ. When the researchers let squid fill their light organs with defective, non-glowing bacteria, the cry gene still didn't cycle properly. This suggested that the glow of the bacteria was the crucial ingredient.

To test this idea, the scientists shone a blue light on the squid holding defective bacteria. Now they expressed just as much cry as the original squid.

McFall-Ngai explains that cryptochromes, the proteins made by cry genes, respond to blue light. Based on the light signals the cryptochromes receive, they turn other genes on or off. Cryptochromes in the squid's head respond to light from the sun to drive its daily rhythms, as in other animals and plants. Those in its light organ, though, respond to the light of its glowing bacterial companions.

The role of the bacterial clock isn't clear yet. "We don't know if the light organ rhythms control any other rhythms in the body," says McFall-Ngai. "But they certainly seem to be involved in controlling the rhythms of the organ itself." The squid controls the daily schedule of the bacteria, too: it jettisons most of its bacteria in the morning, and seems to keep them dimmed during the day by restricting their oxygen supply. At night, it gives the bacteria enough resources to glow at full strength—and that glow drives the clock within the light organ. "There seems to be a tit for tat," McFall-Ngai says. "The host and symbiont 'talk' to one another, controlling one another's biology."

The idea that bacteria can drive circadian rhythms inside their hosts is exciting to humans because we, too, are animals packed full of bacteria. Ours don't glow, but they do line our guts and participate in digesting our food. McFall-Ngai points out that scientists have found "profound circadian rhythms" within our gut tissues, both in their activity and in what genes they express.

Even though we're land-bound, non-glowing vertebrates, our bacteria could be powering circadian rhythms within our bodies just like the squid's. "We think it might be a very general phenomenon," McFall-Ngai says. Our microscopic passengers, that is, might be helping to steer the spaceship.