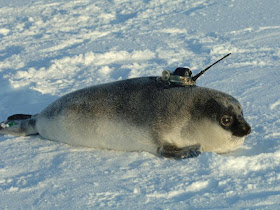 Christmas arrived early this year for people who love animals carrying transmitters around. A new open-access journal called Animal Biotelemetry launched this week, and it promises to bring new tales of mind-blowing bird migrations and seals that study climate change (without exactly having volunteered for the job). Also, sharks.

Published by BioMed Central, the journal will include all kinds of research having to do with biological data gathered by instruments attached to animals. This is a field that's been expanding as the technologies themselves shrink. A few decades ago, scientists were limited to studying the movements of giant land animals such as bears or elk—because transmitters and battery packs were too bulky to comfortably attach to other creatures. Now, miniaturized electronics (aided by GPS satellites) mean that even lightweight birds can carry tracking devices.

Editor A. Peter Klimley describes the history of the field in an introduction to the journal. Klimley himself is a professor and shark guy at the University of California, Davis. His biography claims that he "is known to have held his breath while diving up to 100m deep in order to hand-tag hammerhead sharks with a dart gun." In case "biotelemetry" didn't sound exciting to you.

To mark the occasion, here are some earlier posts involving animals carrying transmitters around, since I am one of the aforementioned people who love them.

This Penguin: An Unexpected Journey