Why Fish Raise Foster Kids (and Give Up Their Own) 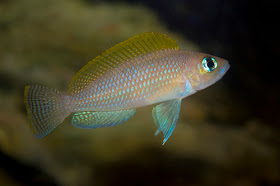 A fish swims along a sandy lake bottom, carrying one of its babies in its mouth. It approaches the nesting cave of another family of fish. With a furtive "ptooey," it leaves the baby behind for adoption. For certain fish, this seems to be a common scene: giving up your young and taking on others' may be the best way to ensure your offspring grow past snack size.

The fish in question is Neolamprologus caudopunctatus, a type of cichlid (pronounced like a compliment for someone's hat).* Just a couple of inches long, the diminutive fish lives only in East Africa's Lake Tanganyika. Males and females form monogamous pairs. They raise their young in burrows under rocks; carrying sand in their mouths, they pile it up around the rocks to build narrow entrances.

For the first 40 days or so in the lives of the young fish (called fry), both parents work to protect them from predators. They guard the nest and attack any other fish that come by looking for a meal. Cichlids can also protect their young by carrying them inside their mouths.

As the fry grow older and start swimming on their own, they may wander away from their parents' nests and into nearby ones. However, cichlids have also been spotted carrying young in their mouths and leaving them at other nests. Scientists at the Konrad Lorenz Institute of Ethology in Vienna set out to see how much of the baby swapping among N. caudopunctatus is intentional.

Researchers scuba dived down to the home of the cichlids, mapped the locations of their nests, and collected DNA samples. Back on land, like the crew of a daytime talk show for African lake bottoms, they analyzed the DNA to find out just how these fish were related.

Out of 32 nests, more than half held adopted fry, the authors report in Behavioral Ecology. Within nests that housed adopted fish, those outsiders made up anywhere from 10% to 77% of the nest.

The researchers took their DNA analysis a step further for a dozen adopted fry, hunting down their biological parents. They found that while some fry had been adopted from nearby nests, others were a very long way from home—as far as 40 meters or more. "It is virtually inconceivable that they swam there alone," says senior author Richard Wagner. The lake is packed with hungry predators. It would be, he says, "like a toddler walking across a busy city without mishap." It's more likely that parents deliberately carried these young fish in their mouths from one nest to the other.

There was another piece of evidence that adoptions happened on purpose. Adopted fish were on average larger (which is to say older) than non-adopted fish across the whole sample. But within each nest, the size difference wasn't significant. This suggests that when cichlid parents give up their young, they select nests with fry that are close in size to their own. Such a strategy might make the adopted fish less conspicuous to predators.

Parents who leave their fry at other nests may be hedging their bets, making sure that at least some of their offspring survive if their own nest is wiped out by a predator. As for adoptive parents, they could just kick out the freeloading fry. But keeping adopted fish around means that when predators attack, there's a smaller chance of your own offspring ending up in another fish's mouth.

"Our paper adds evidence that adoption is an adaptive strategy," Wagner says, rather than simply the result of wandering babies. We humans aren't the only animals that regularly choose to raise others' young. One hopes, though, that human foster parents aren't in it for the reduced predation.

NOTE: It's been pointed out to me by an astute reader (my mother) that the hat compliment could also be "chic lid." Fair point, Mom.
Elizabeth Preston on Monday, April 01, 2013
Share