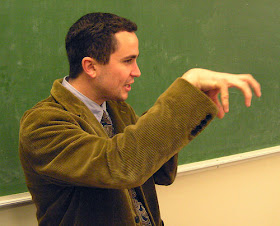 Maybe it's no mistake that we talk about "grasping" new ideas. When we find our hands moving wildly as we try to explain something, maybe we shouldn't feel ridiculous. Research in math classrooms has found that kids learned better when a teacher used gestures—and their grip on the new material improved even more after the lesson ended.

Teachers who gesture more or less while they speak can have other differences too, of course: they might use different intonation or vocabulary, or have more or less energy. University of Iowa psychologist Susan Wagner Cook and her coauthors, though, were only interested in the effect of teachers' hand motions. To isolate this factor, they created a series of videos.

In the videos, aimed at elementary schoolers, a teacher taught a single scripted lesson. The subject of the lesson was equivalence, the idea that what's on one side of an "=" must be equal to the other side.

In one set of videos, the teacher used her hand to indicate "one side" and "the other side" of an equation. A second set of videos showed the same teacher reading the same script, but she kept her hands at her sides. The researchers made several recordings and chose the ones in which the teacher's intonation was the most consistent, ensuring that the only difference between the lessons was her hands.

The kids who watched the videos were 184 boys and girls from 22 classrooms in central Michigan schools. Most were in second or third grade, and a few were in fourth. The kids had taken a pretest to make sure they weren't already familiar with this mathematical idea.

Each classroom watched a videotaped lesson, either the one with hand gestures or the one without. Immediately afterward, they took a test with questions such as:

A day later, the kids had a second set of test questions spring on them. First they answered the same type of questions that they had the day before. Then they saw a second set of questions designed to make them "transfer" the rules they'd learned to new situations. For second graders, this meant trickier addition problems such as:

6 + 4 + 2 = __ + 3
in which none of the numbers on the right side matched the left. Third and fourth graders had to transfer their new skills to multiplication problems such as:

Kids who had seen the lesson with gestures did significantly better than the no-gesture kids on the first test. A day later, they again outperformed the hands-free group—and beat their own test scores from the day before. Their understanding of the lesson seemed to have gotten even better in the 24 intervening hours. (This wasn't true of kids who watched the hands-free lesson.) Finally, the gesture group did better on the test of transferred skills.

A couple factors could explain why students learned better from a gesturing teacher, the authors write. Hand movements might help them pay better attention to the teacher, for example. And seeing a repeated hand motion across different problems might reinforce how those problems are similar.

That doesn't answer the question of why students continued to improve over the next 24 hours. Susan Wagner Cook explains that shortly after we form new memories, those memories are stabilized or "consolidated" in our minds. Consolidation can make new memories even stronger.

"We do know that motor memory is often consolidated during sleep," Cook says. Seeing another person's hands moving may have built motor (movement) memories in kids' minds, as if they were pointing and waving their own hands. "One possibility is that memories encoded with gesture are more likely to be consolidated during sleep," Cook says. "We are trying to figure this out!"

Although being able to point to the two sides of an equation seems like a clear advantage in this particular lesson, Cook says the benefit of gesturing goes beyond arithmetic—or even math. Other studies have shown that hand motions help kids learn in a wide range of subjects.

What's new is the idea that gestures help in the future, not only the present. Cook points out that even though some kids learned the lesson just fine without gestures, they didn't show the same improvement over time that the other kids did. Instead of only clarifying, gestures may help kids grasp their new knowledge more tightly. (Please imagine a fist-closing gesture to drive home this idea.)