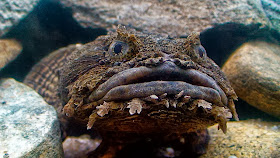 Perhaps understandably, the male toadfish doesn't rely on his looks to attract females. He uses a bellowing, foghorn-like call to lure the ladies instead. But he'd better beware of his neighbors—nearby toadfish, a scientist has discovered, use short grunts to stealthily jam each other's signals.

In the spring, at the start of breeding season, male oyster toadfish nestle into rocks and debris on shallow seafloors in the western Atlantic. From his hidden nest, the male sends out his tuba blasts. A female who hears something she likes comes to the nest and glues down her eggs. Then she leaves the homely male to fertilize the eggs and guard the young till they're grown.

The breeding season stretches to the beginning of fall, and during this time male oyster toadfish have been observed grunting as often as 200 times an hour. When sending out their signature mating calls, neighboring males alternate with each other so as to be heard more clearly. But more often, they make quick little grunts that do overlap with others' calls.

To find out why toadfish interrupt each other like this, biologist Allen Mensinger of the University of Minnesota, Duluth, gathered a small group of male toadfish in an artificial pond. The pond was lined with underwater microphones to capture the fishes' calls. Bricks and concrete slabs were stacked into simple shelters on the bottom of the pond. After a couple days in their new home, the oysterfish agreeably moved into their "nests" and started calling out for females. (Those, however, were lacking.)

Each toadfish that Mensigner recorded had a distinct "fundamental frequency" (the lowest note it produced) to its mating call. In other words, each fish called with its own voice. But out of the thousands of recorded toadfish sounds that Mensigner analyzed, the majority were short grunts that interrupted other fishes' calls. And when a grunt overlapped with another toadfish's mating call, that call's fundamental frequency—its voice—was altered.

Mensinger thinks the grunts essentially jam the signals from the bellowing toadfish. In this way, interrupting toadfish might make their neighbors' carefully tuned calls less attractive to listening females.

The interrupting fish time their quick grunts to end before their neighbors' mating calls do. Mensinger thinks this protects the interrupters from being detected. Don't worry too much for the toadfish, though—despite their apparent gamesmanship, a few males managed to breed successfully when Mensinger threw some female fish into the artificial pond later in the season.

To hear the oyster toadfish in all his uninterrupted beauty, click here.