Why You Itch When Others Scratch 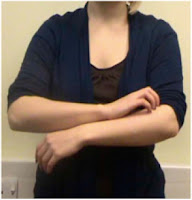 Itching is contagious, and not only when one party has the chicken pox. The mere sight of a stranger scratching can be enough to trigger an itch in your own flesh. If you're especially prone to contagious itchiness, psychologists say, it's not because you relate well to other people—you're just neurotic.

The researchers who delved into the science of contagious itching thought it might be similar to another famously spreadable phenomenon: yawning. Previous studies found that a person's likelihood of catching someone else's yawns is linked to empathy. It's easier to trigger contagious yawning in people who are good at understanding others' states of mind.

To explore contagious itching, psychologist Henning Holle at the University of Hull, UK, and his colleagues subjected 51 volunteers to videos of people scratching themselves. Each person watched a series of videos with changing variables: some showed a man scratching himself and others showed a woman; the model scratched 5 different body parts (upper or lower left or right arm, or the middle of the chest); and in control videos the model simply tapped the body part in question.

After each video, subjects rated how itchy they felt. Since the experiment was being filmed, researchers could also see how often their subjects scratched themselves, whether they realized they were doing it or not.

The results showed that itching is highly contagious, the authors report this week in PNAS. People reported feeling itchier after the scratching videos than the tapping videos, and most subjects scratched themselves at some point during the experiment. It's normal to feel itchy when you see someone else scratching. But the degree of itchiness varies from person to person.

To find out what makes someone especially vulnerable, the researchers gave subjects a group of standard personality tests. "We expected to find contagious itching to be associated with empathy," Holle says. A questionnaire that measured empathy, though, turned up no connection.

But the researchers did find a correlation between their subjects' contagious itching and their neuroticism. As defined by psychologists, neuroticism is someone's tendency toward worry and insecurity. Holle and his colleagues measured this and other personality traits using a test called the Big Five personality inventory. (The other four traits in this test are openness, conscientiousness, extraversion, and agreeableness. Worried you're a worrier? You can take a version of the test here.)

Making a study of itching and scratching even less physically comfortable, 18 of the subjects watched the videos while inside an fMRI scanner. They weren't allowed to scratch themselves, since that motion might interfere with the machine. But when they saw scratching videos, the activated areas in their brains matched a previously observed group of regions called the "itch matrix."

Among other areas, this brain network included the premotor cortex (involved in planning and carrying out motions) and the primary somatosensory cortex (headquarters for our sense of touch). Also active was the anterior insula, an area the authors say may be crucial to our feeling of sharing another person's pain.

When asked how itchy this research had made him personally, Holle declined to comment.