Math Shows Penguins Only Care about Themselves 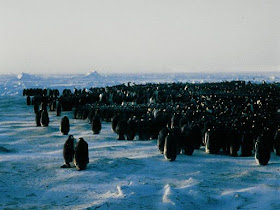 Don't let the adorable mini-orchestra-conductor look fool you: penguins aren't that nice. When emperor penguins huddle together during Antarctic storms, they act like they're all in it together. But a new mathematical model shows just how the clusters of birds keep warm, accounting for everything from their geometry to the speed of the wind. Concern for one's fellow bird, it turns out, isn't a factor.

Regardless of your motivations, huddling together in a group is a great way to wait out a frigid storm. Instead of burning up their own energy reserves trying to warm their bodies, emperor penguins can rely on the warmth of a bunch of big feathery animals pressed together. There may be ten or hundreds of bodies in the huddle. Inside, the temperature is between 20 and 37.5 degrees Celsius (a cozy 68 to 99.5 degrees Fahrenheit). In the chilliest storms, penguins squeeze as tight as 10 birds every square meter.

Those huddles aren't motionless, though. With a continuous slow shuffling, the penguins rotate through the formation. Birds with their backs exposed to the wind creep away from it, up the sides of the huddle, until they find some protection. Meanwhile, birds that were formerly on the warm interior find themselves on the outside.

Three applied mathematicians at the University of California, Merced, set out to create a computer model of penguin huddling. Aaron Waters, François Blanchette, and Arnold Kim wanted to find out how well the birds' strategy works—and whether any penguins are left out in the cold.

To pack their penguin huddle as tightly as possible, the mathematicians imagined the birds on a grid of hexagons. This is the best way for circles to squeeze into a plane (think of a honeycomb), and scientists in the field have observed that real penguins arrange themselves roughly this way. The researchers also assumed that "penguins in this huddle have uniform size and shape."

Next, they added wind to the model, which flowed around the huddle differently depending on its overall shape. Then they calculated the rate at which each computerized penguin was losing body heat. They sent the coldest penguin shuffling around the outside of the huddle until it found the warmest spot it could stand in, then started over with the new coldest penguin.

The simulated penguins constantly shifted positions within the huddle, just as real penguins do. Over time, the model huddle tended to take on the shape of a flat-sided oval and travel slowly downwind (as penguins on the windward side continuously moved away from it).

When they calculated the flock's heat loss, the authors discovered that their model huddle was very fair: every penguin lost approximately the same amount of body heat. But these model penguins were only programmed to maximize their own warmth, not to consider the warmth of other penguins or the group as a whole. This means that even if penguins are only looking out for themselves, the whole huddle stays warm, as the authors report in PLOS ONE.

Just because emperor penguins can be totally selfish doesn't mean they are, the authors point out. It's still possible that penguins are altruists, organizing their huddle by thinking about the group as a whole. But it's not necessary to explain how they behave in the wild.

There's one flaw in the penguins' strategy: the elliptical shape a huddle tends to take on isn't optimal. A less stretched-out formation would help the whole group stay a little warmer. Maybe the emperor penguins should consult with a mathematician.

ADDENDUM: Francois Blanchette, who was traveling when I first contacted him, says that this research was inspired by (what else?) March of the Penguins. While watching the movie, he noticed that factors in the penguins' environment, such as wind flow and heat transfer, were relevant to his own field of fluid dynamics. "I figured there should be a problem I could address that had to do with penguins," he says. "I was looking to do something different than my usual line of research."

With penguins out of the way, Blanchette and his coauthors are now interested in modeling other groups of living things, such as bacterial colonies. "However, not being biologists," he says, "we are not very familiar with other biological systems where such a model could be useful." If you're a biologist with a clump of organisms you'd like to model, let him know.

P.S. If you enjoy reading about math and self-interested animals, you may like my earlier post Geometry Proves Sheep Are Selfish Jerks.
Elizabeth Preston on Wednesday, November 21, 2012
Share