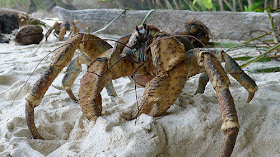 It was crabnapping for a just cause. But the crustaceans that found themselves suddenly plucked from their burrows, stuffed into opaque sacks, and carried off through the forest couldn't know that. When the scientists freed their captives, they waited to see whether the crabs would find their way home or be stranded forever. They'd be watching—from space.

The best way to find out exactly where and how far an animal travels is to tag it with a GPS tracker. But if you're interested in invertebrates, most of your subjects are too small or squishable to carry around such a device. Enter (scuttling in from stage left) the robber crab, Birgus latro. Also called the coconut crab because of its predilection for cracking open coconuts, the species is the largest arthropod on land. Legs included, it can grow to nearly a meter across.

Robber crabs live on islands in the Indian and Pacific Oceans, tucking themselves into hollow trees and rock crevices during the day to keep their shell-less bodies from drying out. Females make an annual migration to the coast to lay their eggs in the ocean. Less is known, though, about the movements of male crabs. To find out what they're up to—and because the heavier males presumably wouldn't mind the bulky GPS tags so much—Jakob Krieger of the University of Greifswald and other German researchers tagged 55 male robber crabs on Christmas Island.

During the day, the GPS satellites didn't return much data, since the crabs were mostly hidden in their burrows. At night, they began to roam.

The crabs were highly faithful to their homes, usually staying close to the one to three hiding spots they preferred. But during the time the scientists were monitoring them—up to three months—15 of the crabs went on mysterious, long-distance journeys to the coast.

The authors report in PLOS ONE that these journeys were up to 4.2 kilometers long, a distance that might not seem impressive, except that the top speed observed in the study was 150 meters per hour. If you set a shuffling robber crab at one end of a soccer field at the beginning of a game, you just might be able to retrieve it from the opposite end at halftime.

All the journeying crabs traveled along a similar route, sharing a "migratory corridor" toward the ocean. Why do they go on these arduous errands, visiting the coast for 1 to 10 days before returning home? Krieger says he and his coauthors are "convinced that it is most likely a combination of factors."

One possible factor is reproduction; athough they mate inland, male crabs may try to boost their success by pursuing females out to shore. Another is nutrition. Krieger says the crabs may need to drink saltwater to get the calcium and sodium that keep their skin sturdy. They also get the nutrients they need by eating other crabs, such as the red crabs that migrate en masse across Christmas Island every year. Traveling robber crabs may take advantage of this mobile red-crab buffet. (Here's a worthwhile video of red crabs dodging traffic and clinging to cliff faces during their own journeys.)

The fact that male robber crabs traveled at all was news to the scientists. But they also wanted to know how well robber crabs can navigate, and that's where the crabnapping came in. A dozen crabs were bagged, moved a kilometer or so, and re-released to see how they'd manage.

Crabs that were freed somewhere within the migratory corridor, that popular robber crab highway, found their way home with no problem. But those released someplace unfamiliar were lost. The GPS data showed that these crabs used their release points as a new home base from which they took exploratory trips outward, trying to get their bearings. Yet they never found their old homes.

Though robber crabs might navigate using cues such as the position of the sun or moon, the scent of the ocean, or the earth's magnetic field, they seem to especially rely on memorizing a path in one direction and retracing it on the way back. The GPS data showed crabs following identical routes on their way to and from the ocean.

The researchers also crabnapped one of their victims twice, and saw that he followed precisely the same path homeward (along the migratory corridor) both times. This suggests that robber crabs remember the landmarks they find along their routes. Of course, when you're moving at a crab's pace, there's plenty of time to observe the scenery.