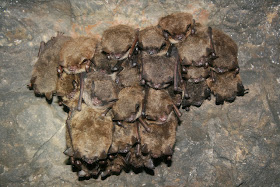 For an easily crushed animal that rests during the day, a highway seems like maybe the worst possible home. Yet some bats pick roosts that are under bridges, or in other spots booming with human noise. Why subject themselves to that? For bats of at least one species, the sound of traffic is easy to doze through. And the more they hear it, the more they ignore it.

The greater mouse-eared bat, Myotis myotis, often turns up under bridges in Europe. Jinhong Luo, a PhD student at the Max Planck Institute for Ornithology, wanted to know how they can tolerate the noise. He and his colleagues trapped male bats from a cave in Bulgaria and brought them back to the laboratory for a hearing test, which was really a sleeping test.

Well, not sleeping exactly. Like many other bat species, the greater mouse-eared bat goes into "torpor" during the day, which is like a mini-hibernation. Its metabolism and body temperature drop sharply, letting the animal conserve energy. In the evening, the bats start to stir. After waking up gradually, they head out from their caves (or under-bridge roosts) to hunt.

The researchers created several different sound recordings that they would play to roosting bats to try to wake them up. There was a recording of the bats' own colony, another of local bird sounds, and one of trees rustling in the wind. The authors also created recordings that mimicked highway traffic passing 25 meters, 50 meters, and 100 meters away.

Each bat was housed by itself for the sound tests. Over the course of two roosting days, the bats heard each recording twice for five minutes. By monitoring temperature sensors on the animals' skin, the scientists could see whether bats started to wake up—that is, warm themselves—after hearing each sound.

Luo and the others tested a dozen bats. (They started with 15, but two weren't snoozing deeply enough to run all the tests, and one somehow pulled the temperature logger off the middle of its back.) The bats were most likely to wake up after hearing the recording of their colony, or the sound of rustling trees. But traffic sounds were least likely to wake them. Bats responded more strongly to all sounds later in the day, as it got closer to their normal waking time.

It's not too surprising that bats respond to the squeaks and shuffles of their own colony, which might hold useful information. But why the windblown trees? A likely answer is that Myotis myotis doesn't hunt by echolocation. Instead, it listens for the sounds of beetles walking through the grass. Since the bats are already attuned to the noise of swishing vegetation, it may make a good alarm clock.

As for the sound of cars passing, Luo points out that most rumbling traffic is at a lower frequency than the sounds of a bat colony or rustling leaves. Since bats hear better at higher frequencies, this means traffic noise is "basically out of the best hearing frequencies for nearly all bat species."

However, Luo is quick to add, "We would never claim that traffic noise is not disturbing to roosting bats or even to torpid bats." The bats in his study did respond slightly to traffic noise, raising their body temperatures compared to when there was silence. And bats might react differently to highway sounds when they're awake, or when they're roosting but not in a state of torpor.

Whatever sound they heard, bats responded less on the second playback, or when it was played continuously for an hour. They were especially quick to adjust to traffic sounds. Like a teenager sleeping through an alarm clock, bats can tune out a familiar noise more easily. But that doesn't mean they're immune to harm from their noisy human neighbors. We just don't know all the ways that living with our roads and other rackets might influence them.

"To be honest, we are in the very beginning of understanding the potential effects," Luo says. "Answers are not always straightforward."